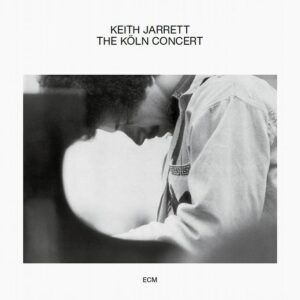 Recorded in 1975 at the Köln Opera House and released the same year, this live solo piano piece by Jazz piano legend, Keith Jarrett, was not the first of his solo piano recordings but is perhaps his most famous.

Nothing in this programme of music was planned before he sat down to play, and this was to become typical of Jarrett’s later improvised works. The groans and sighs from Jarrett are spontaneous, it’s as though the music is coming from low down in his gut and he is forcing it out of his body towards the keys. You can feel the intensity, as he is totally transfixed in himself and his connection to the piano.

Although it appears as one continuous piece it’s actually dived into four separate parts, as this is pre CD and it had to fit on to a double vinyl album.

The opening sequence is as memorable an introduction as you will ever find in a jazz piece and is instantly recognisable. What makes this particular concert unique was that the piano Jarrett selected, a Bösendorfer 290 Imperial, was at the last minute and unbeknown to Jarrett replaced with a much smaller baby grand and placed on the stage by the venue, this error was not discovered until too late and the piano could not be  replaced.

The piano was in poor condition and needed several hours of tuning to make it even playable. The sound was thin and tinny in the upper register and weak in the base register, plus the pedals did not work properly. This meant Jarrett had to adapt his style to suit the piano, which required a rolling left hand style (ostinatos) to give the effect of stronger bass notes, and he therefore, concentrated his playing to the middle of the keyboard.

The piece was then played in this particular style through necessity and this has given it its uniqueness. It’s an uplifting piece that has stood the test of time and was received enthusiastically at the time and to this day is still his best selling work.

All compositions by Keith Jarrett.

If Keith Jarrett is not a name familar to you and you are interested in exploring more of his Jazz works there are several more solo piano concerts. Finally these long continuous concerts had an effect on Jarrett’s health and in the late 1990s, Jarrett was diagnosed with chronic fatigue syndrome and this meant he was unable to leave his home for long periods of time. The consequence of this illness was that his solo sets became much shorter and more manageable for him to play.

As mentioned before for all his solo concert works Jarrett has nothing prepared until he sits in front of the keyboard.

I heard a story and I am not sure of its authenticit,y but apparently at one concert he sat down in front of the piano and inspiration did not come. There then followed a prolonged silence with much embarrassed shuffling from the audience, then someone shouted out “Key of C” which Jarrett duly hit and the concert began.

If you ever attend one of his concerts a word of warning Mr. Jarrett is a prickly character and hates any interruptions, especially coughing and late arrivals  and he has been known to stop the concert and berate any the offenders!