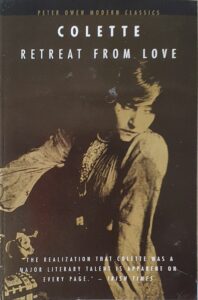 Retreat from Love is the last in the series of the celebrated Claudine novels written by Sidone Gabrielle Colette (1873–1954) and incidentally the first written without the collaboration of her controlling husband, Willy.

This novel first published in 1907 is set in an isolated farmhouse in the Jura area of western France, is a story about Claudine who is awaiting her husband Renaud’s return from a Swiss sanatorium. She distracts herself by encouraging a young friend Annie, to recount salacious episodes from her love life.

When Reynaud’s homosexual son Marcel arrives on the scene, Claudine sets about matchmaking them but the problems her meddling causes she lives to bitterly regret. After Renaud dies, Claudine’s resigns herself to a life of suffering and heartache. Gradually, however, she allows the rhythm and beauty of the natural world around her to reawaken her desire and to get on with her life once more.

Colette was up to the time of her death acclaimed as one of the greatest living female French writers and indeed today some 66 years after her death interest in her work still remain.

As a window into the morals and attitudes of 1900’s France, Colette’s observed and commented on the attitudes and morals of the middle classes from a female perspective for the first time. Her novels helped expose the bizarre underbelly and lifestyle of the French middle classes. As no stranger to controversy herself the reader also had reason to believe that the author was not only an observer but a willing participant in some of the tales she told, which add spice to the intrigue.

The 2018 film starring British actors Keira Knightley and Dominic West and directed by Wash Westmoreland has stirred up a new interest into the writer’s life and work; this will no doubt stimulate a new audience to delve into more of her works. Other stories written and inspired by her such as Novella Gigi, have also been adapted and appeared on film to critical acclaim.