ST LUCIA: THE ONLY COUNTRY NAMED AFTER A WOMAN

Words and Images by Mike Pickup

“There are no straight roads in St Lucia”, said George, as we drove away from Hewanorra airport. With mountains rising to over three thousand feet, the alpine-like roads mean it can take over two hours to get from one end of the twenty-six-mile long island to the other.

Earlier that morning I had boarded a British Airways flight at Gatwick. “Glass of Champagne?” I was asked as I settled into my seat in World Traveller Plus. It was only breakfast time but it seemed impolite to say no. The service, extra legroom and the ability to recline your seat without disturbing the passenger behind you, was well worth the modest upgrade from the standard cabin for my eight-hour flight.

St Lucia was originally settled by the French in 1660, but as a result of battles with the British, it swapped hands fourteen times until 1814 when the British took final control. As a result, the official language is English but French-based Creole is widely spoken, cars drive on the left as in the UK but the town names are in French. Home for my stay was Windjammer Landing, comprising hotel rooms and villas built up a steep hill that lead down to a sheltered sandy beach. The hotel offers a choice of self-catering with breakfast, or all-inclusive. I’d chosen all-inclusive and was allocated a luxurious two bedroom villa at the top of the hill. As well as two spacious bedrooms, it included two bathrooms plus a large, comfortable lounge and a huge kitchen diner equipped with every conceivable extra. Outside there was a neat patio with recliners and a pool with stunning views out to sea. A fleet of air-conditioned shuttle vehicles were always available on-demand to ferry guests up and down the hill’s twisting roads. 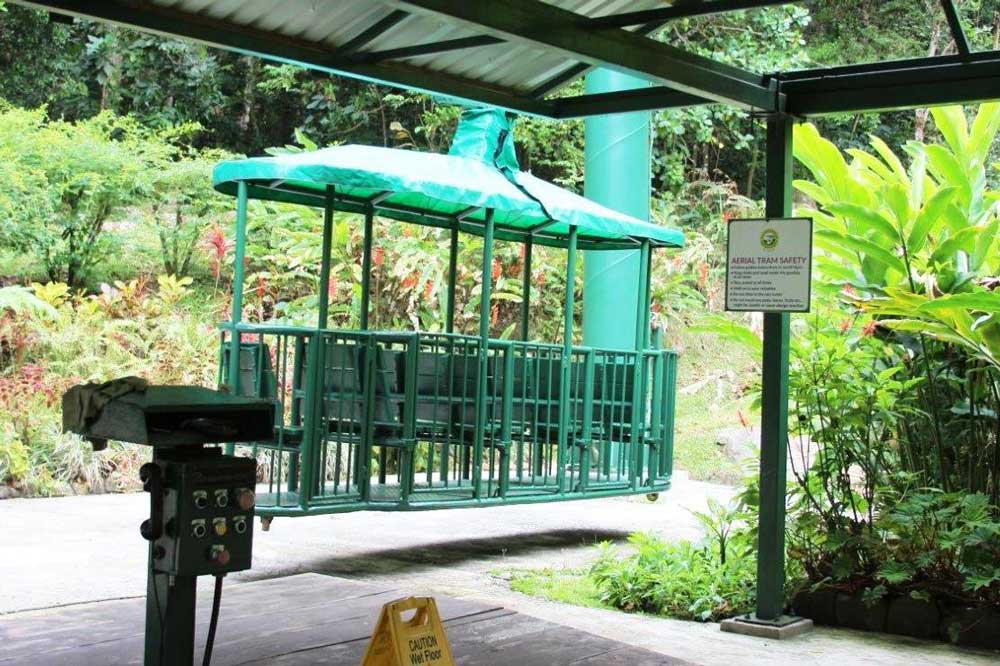 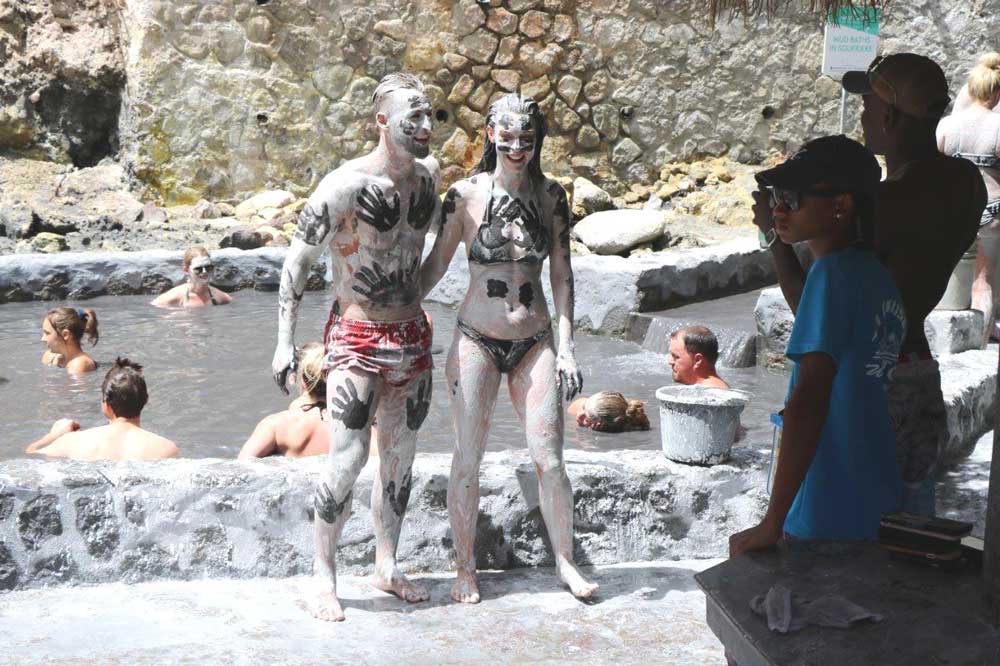 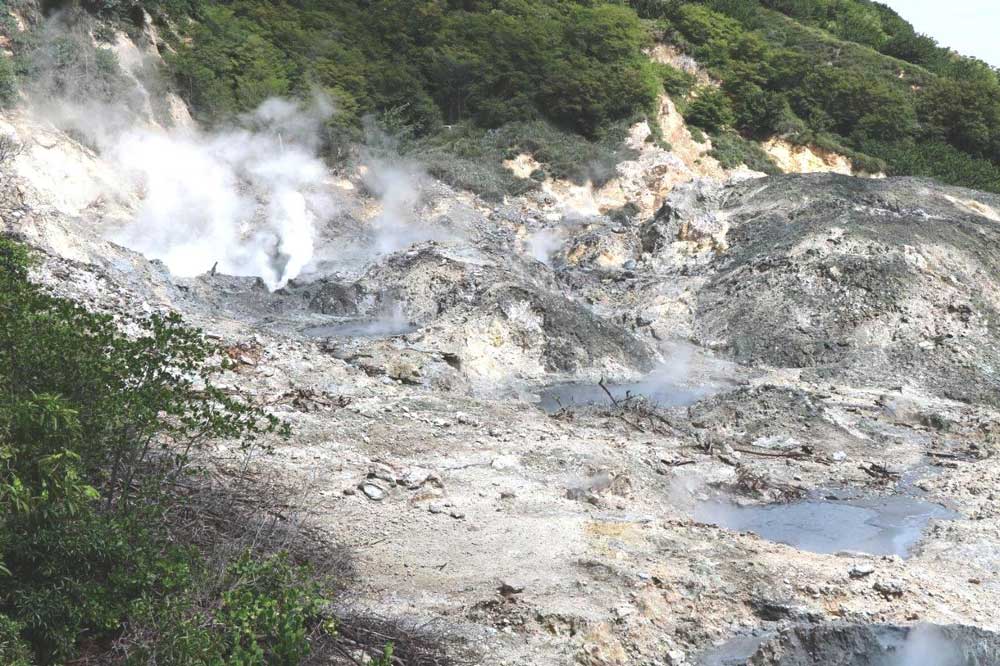 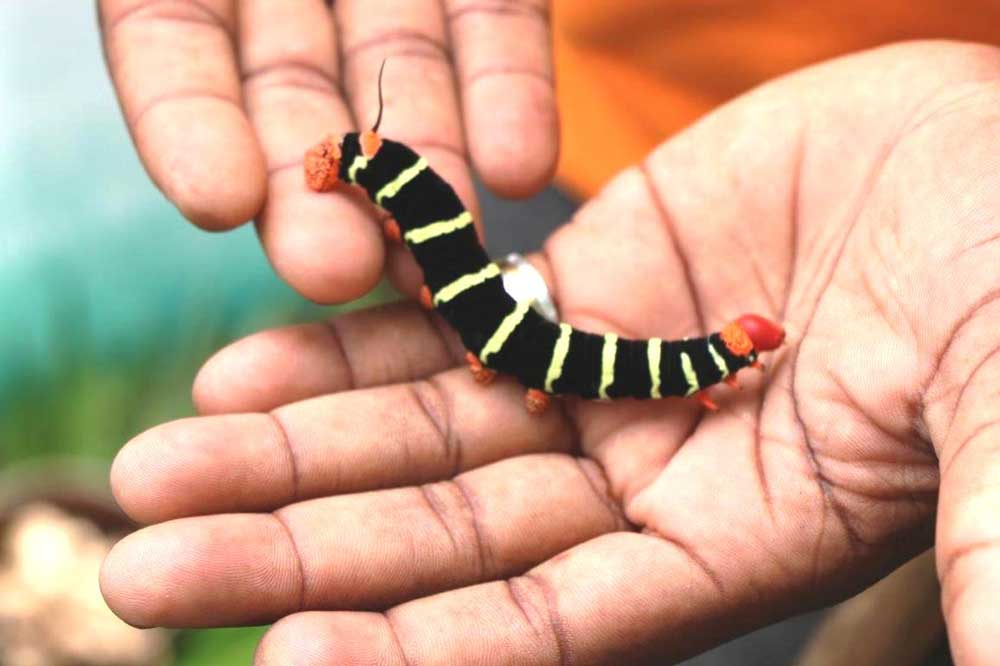 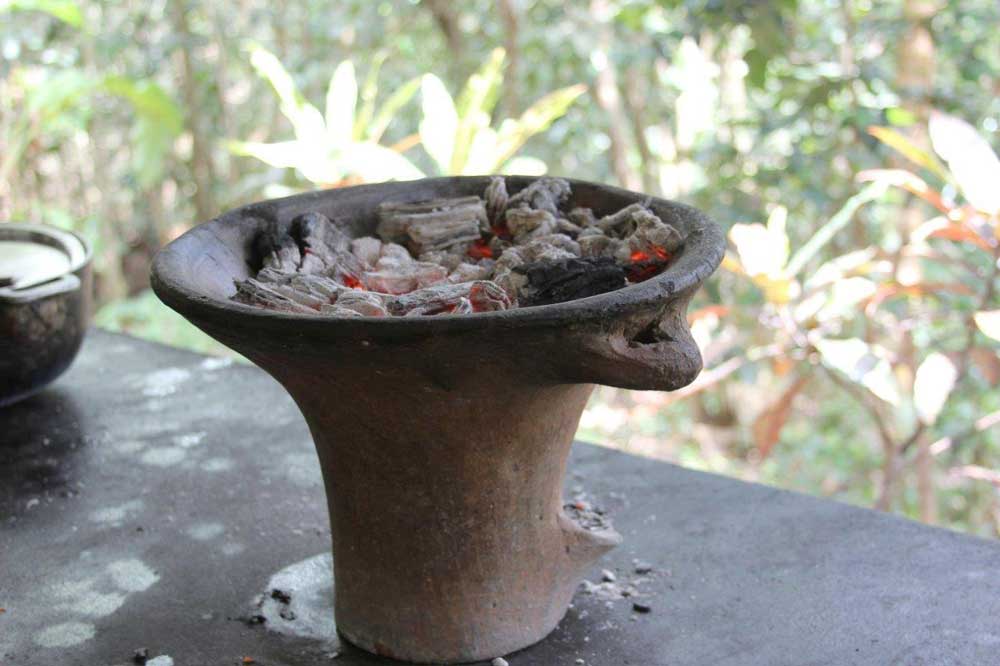 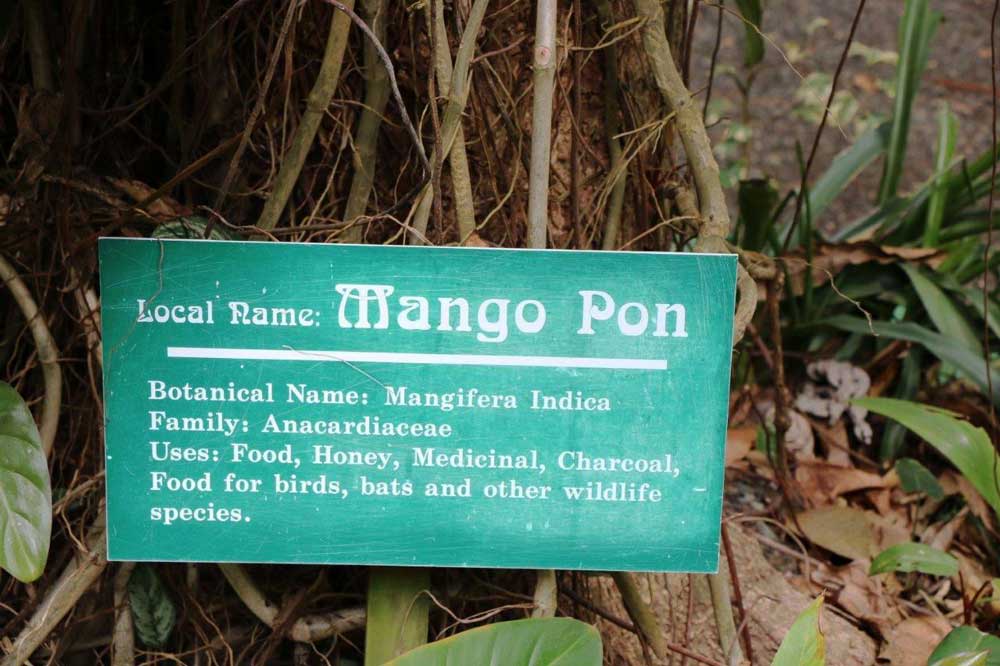 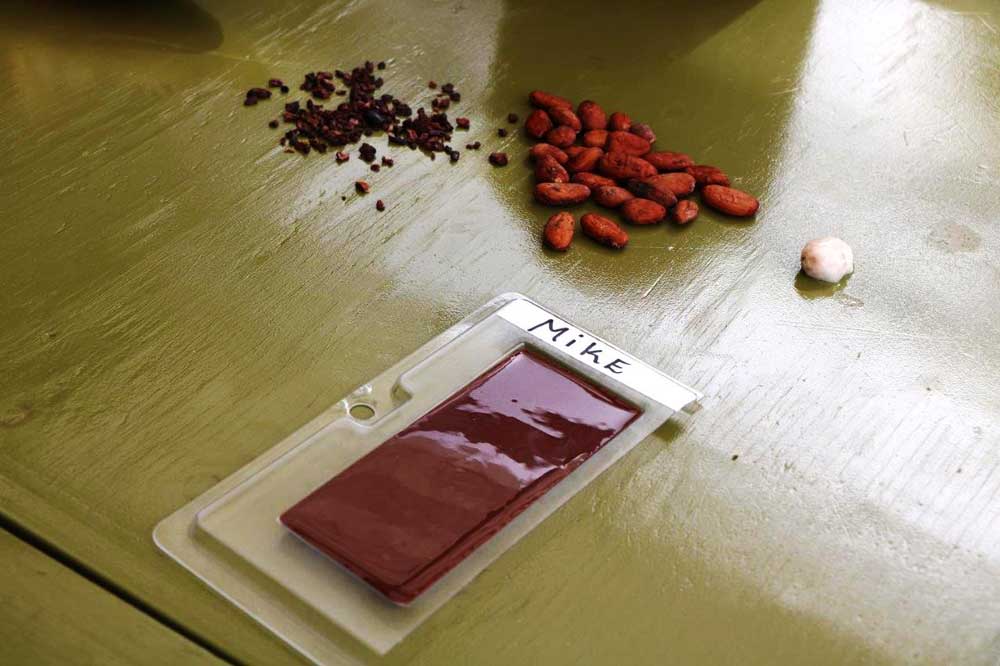 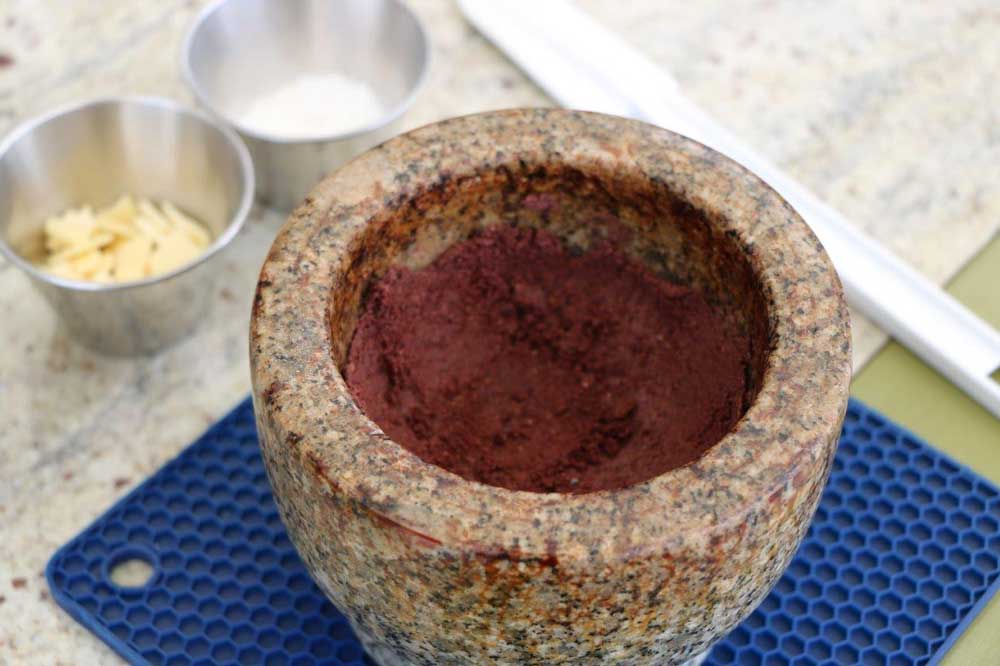 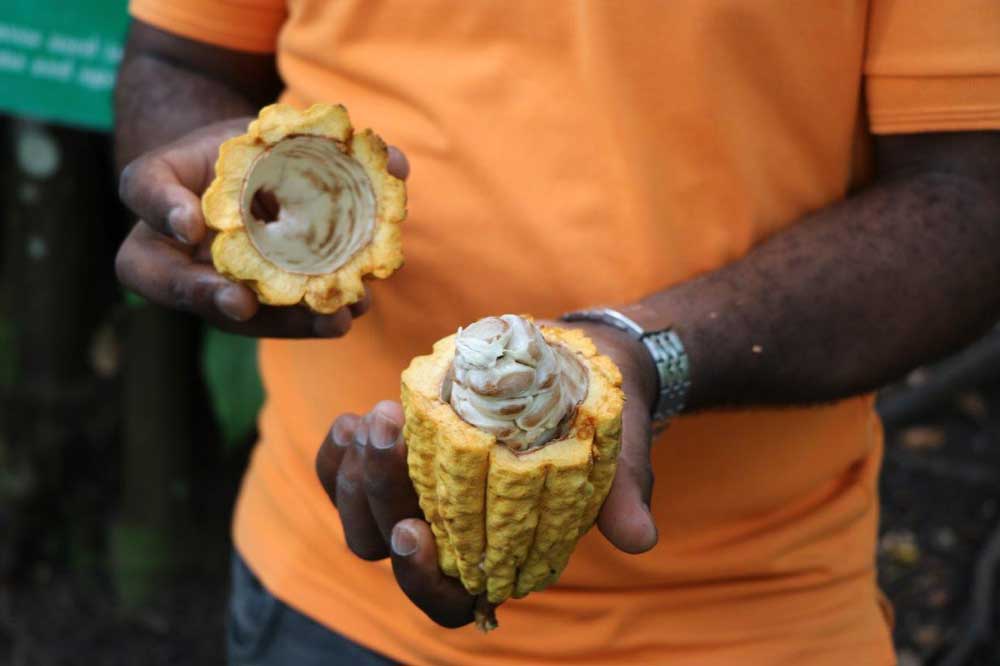 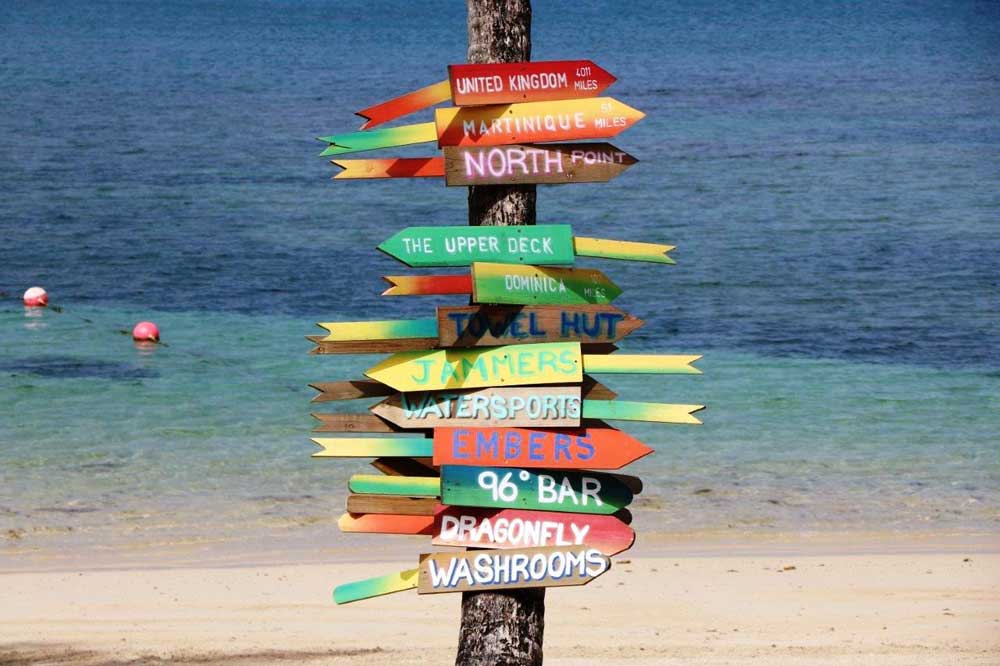 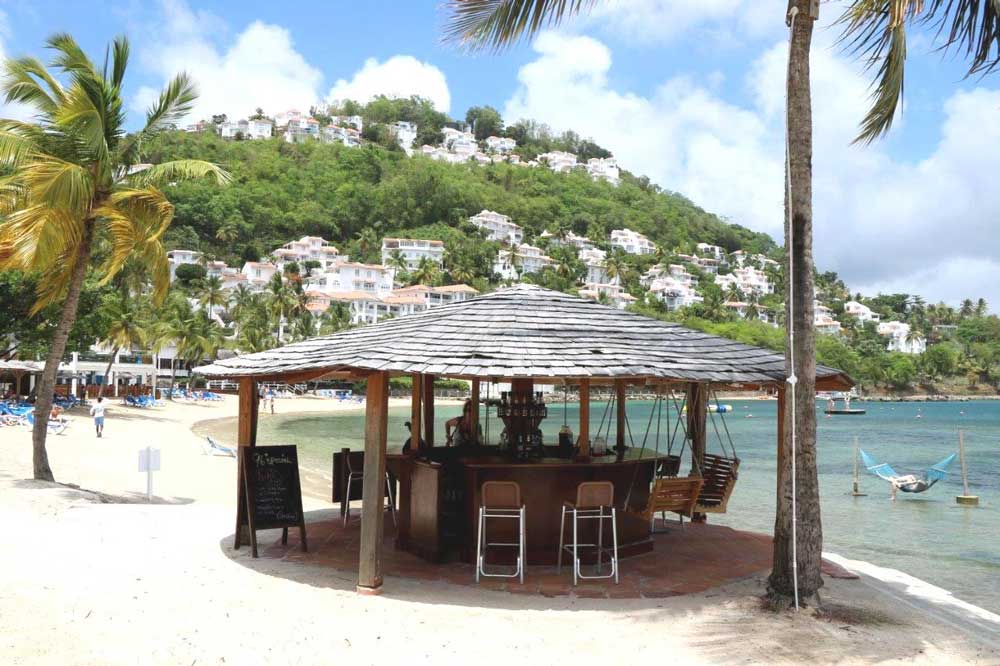 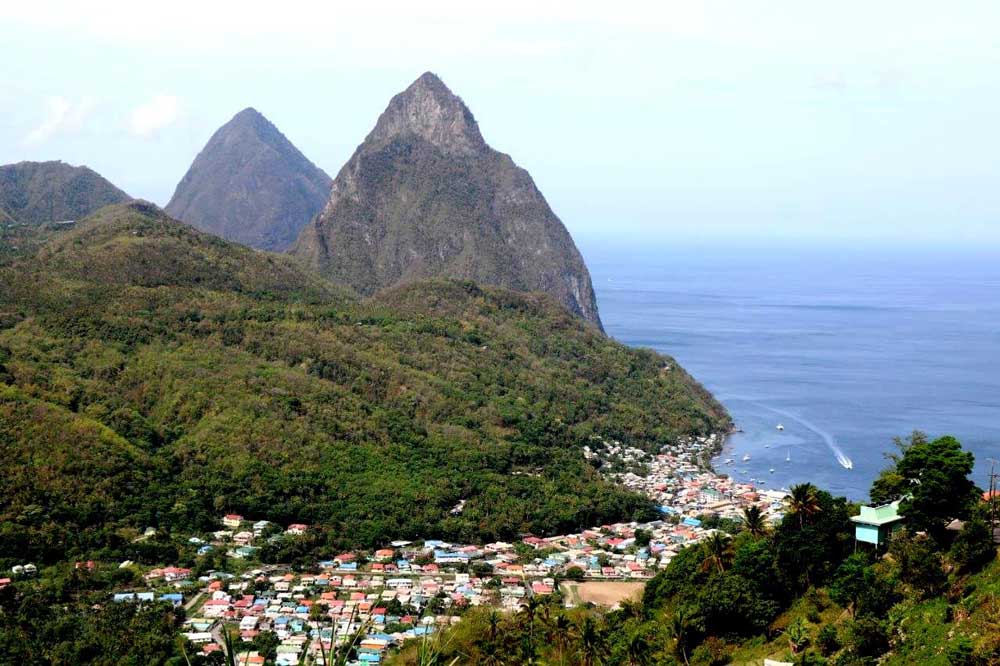 Several restaurants by the beach offered a wide selection of food from light bites to multi-course feasts and there was an authentic Italian restaurant, Papa Don’s, just up the hill from the main beachfront area. There was also a well-equipped gym, beauty spa and a children’s recreation area as well as several pools, and a water sports area away from the swimming area. There was even a shop and a small library. It would have been so easy to stay put, but I wanted to explore this unusual island.

Cocoa trees abound and it was interesting to discover that the fresh beans in the pod are white and very sweet, changing colour and taste as they dry. A popular visitor attraction is chocolate making, and on a visit to the 120-year-old Howelton Estate, I gave it a try. Grinding the cocoa beans in a mortar and pestle was energetic but satisfying and soon the chocolate mix was liquid and shiny. I decided to add a little mint before it was poured into a mould and popped into the fridge. After enjoying a cold beer, my now solid home-made chocolate bar was expertly wrapped for me to take away.

The island has a huge variety of vegetation and wildlife. I enjoyed the Lushan Country Life trail where an expert guide pointed out herbs and plants and explained their medicinal and culinary uses. He also showed me early cooking devices known as coal pots and scooped up huge, friendly black and yellow caterpillar with orange feet and a tiny black tail who happened to pass by. The Tet Paul nature trail offered more information on plant life and, at the top, a stunning view of the sea and the twin Pitons for which the island is famous. They were formed by lava erupting from the sea bed and cooling to form the characteristically steep-sided domes.

Just outside Soufriere, I visited the Caribbean’s only drive-in volcano, an area with steaming sulphur springs and bubbling, hot grey pools. Visitors can also enjoy the mud baths where, having been artistically covered in volcanic mud, they can soak in naturally heated pools – a process designed to leave the skin fresh and smooth. Don’t forget to take swimwear and a towel.

Another fascinating trip was on an aerial tram through the pleasantly cool mountain rain forest. A guide explained the vegetation as well as spotting a few hummingbirds along the way. In fact, the island is a bird spotters paradise with over 180 species to be found. They include black finches, orioles and six species that can be found only on the island.

My visit was over far too soon as George drove me back to the airport. I was left with memories of a unique Caribbean island, mountains, lush greenery, winding roads and, above all, genuinely friendly people who were always ready to help and chat. Just don’t get them started on cricket!

Tags:
Previous Article
GETTING ON THE MARKET FOR THE OVER 55s
Next Article
THE BANK OF MUM AND DAD