AN INDIAN ADVENTURE (WITH TEENAGERS IN TOW)

As a father of four, the majority of my recent holidays have been spent in villas in the Balearics or at all-inclusive hotels in the Canaries. When I turned 55 a few years ago, my wife and I decided that spending another holiday supermarket-shopping or being ‘entertained’ by local flamenco dancers was definitely off the cards. We wanted to see a bit of the world and do some proper travelling while we still could. The only problem was that two of our offspring were teenagers, still living at home, so if we were going to do this, then they would have to come with us. Our obvious concern was that their requirements and ours would be two completely different propositions. The lure of the all-inclusive in the Canaries was apparently all they desired, and tours, museums, and absorbing local culture were anathema to them.

Our trips are usually two to three weeks in August, but this year we opted for February half term because we expected GCSE and A level exams to be looming for the teenagers (little did we know what 2020 really had in store!) We took off to India for an eight-day jaunt around the golden triangle, and it turned out to be both eye-opening and magical. 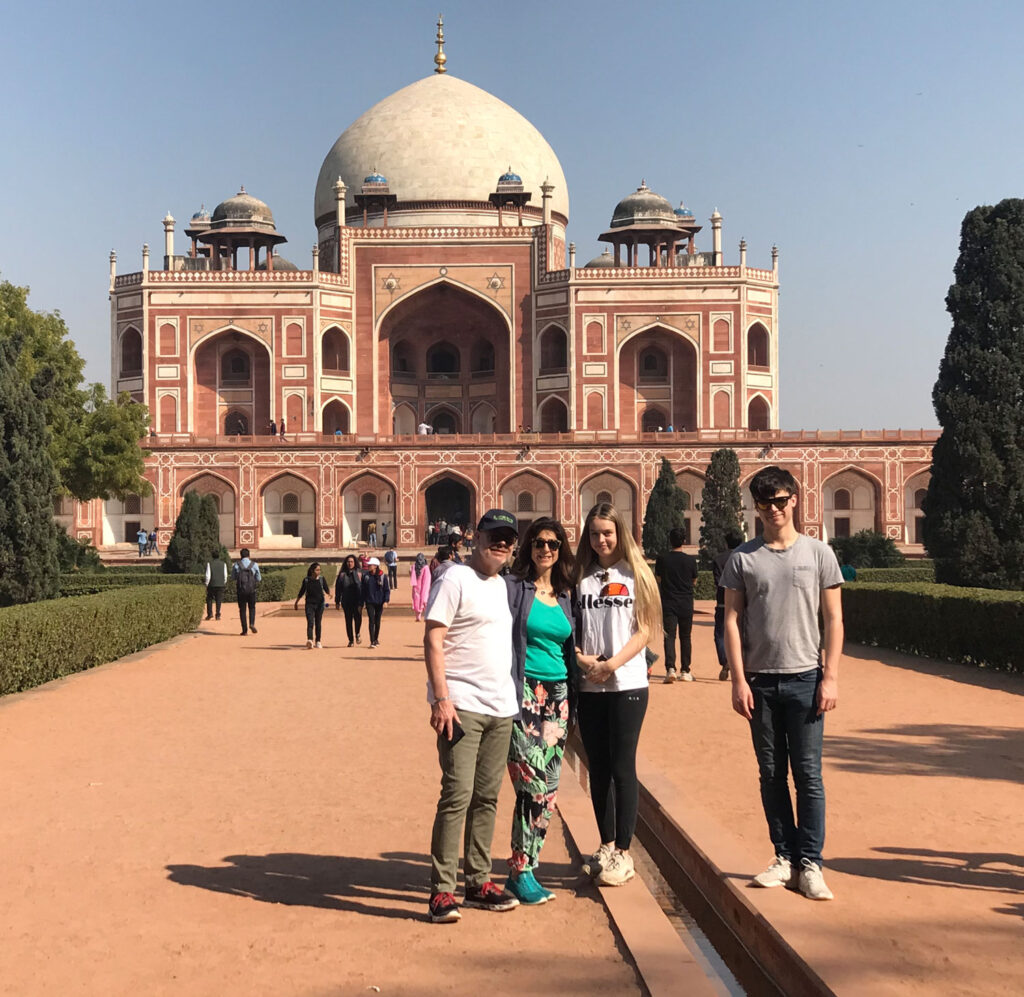 We flew into Delhi late at night and it took several hours to run the gauntlet of the somewhat bewildering immigration process,  before emerging to be collected by our charming driver Vinod, who remained with us for the entire trip and took us to the hotel in our own air-conditioned mini-bus.

The next day we had the morning at leisure followed by a half-day tour of this vibrant capital city, including the magnificence of New Delhi and a rickshaw tour around the exotic, dusty and bustling lanes and bazaars of Old Delhi.

After our second night, we were up early and driven to the railway station to catch the Gataman Express to Agra: a two-hour journey and a welcome rest for all of us! The reason to visit Agra is of course to see the Taj Mahal, otherwise, it really is quite an uninspiring little city. We spent half a day at the Taj with our own guide. It was my second visit, as I had been before with a friend. So, whilst being in awe (as you cannot fail to be), I did enjoy watching the others being seduced by this incredibly beautiful building.

We returned the following morning at sunrise, (06.30, which I thought was a bit much!) but the Taj Mahal looks completely different in the soft light of dawn and shrouded in the mist: even more magnificent and a lot less crowded.

Off then, in the mini-bus for the drive to Rathanbone National Park, said to be home to the (elusive) tiger. On the way, we stopped for a tour around Fatehpur Sikri, the deserted ancient city of Emperor Akbar, built in the late 16th Century and abandoned after only 12 years due to water scarcity. 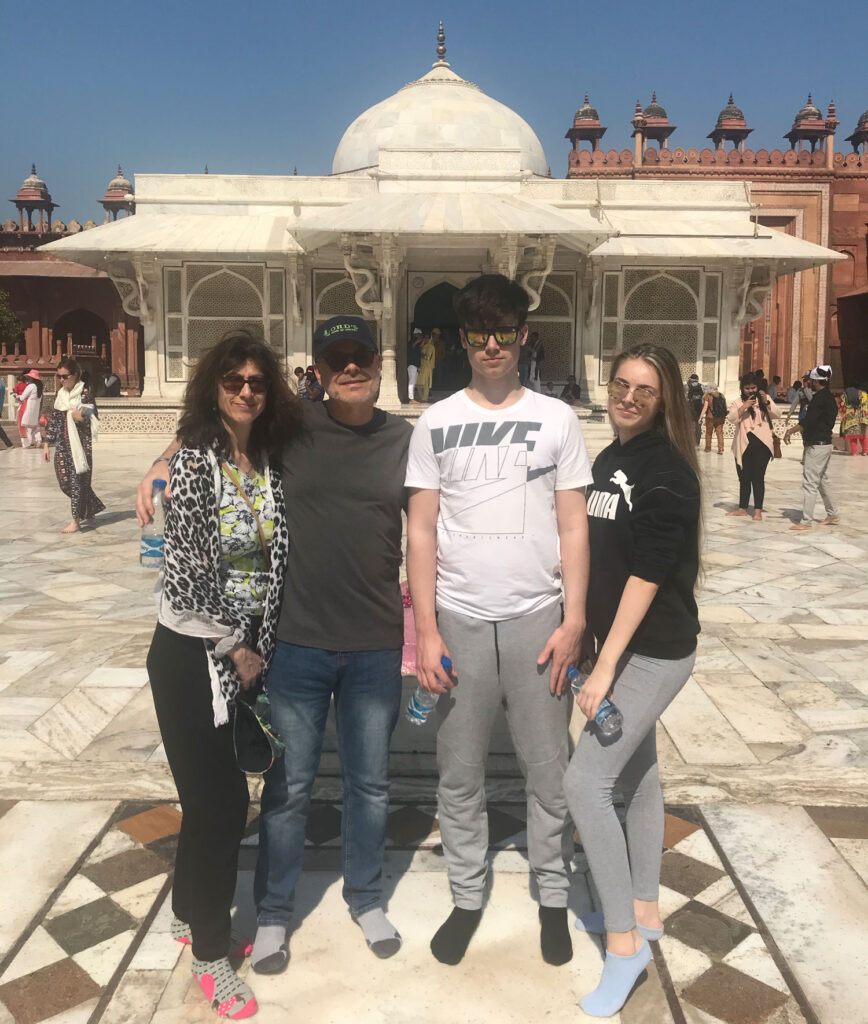 We then had a series of game-watching drives in an open-topped jeep through the National Park in search of tigers, and as you have probably guessed, we didn’t see any! As fascinating as they were, the highlight of those outings was the trip through the local town each day, just waving at people and drinking in the sights and smells of rural India.

Our final stop was Jaipur, aka the Pink City. Just the two of us went for a guided walk through the old town with a wonderful guide. The teenagers didn’t want to come, as true to usual form they stayed at the hotel and enjoyed the pool.

Needless to say, we were all exhausted. It was a very busy trip but no one complained and we all enjoyed it.   it was at times shockingly eye-opening to see true poverty first hand, but at the same time, experiencing India was awe-inspiring, both beautiful, and life-changing.

What worked was staying in good quality hotels with pools; you need good food and sleep on an intense trip like this; having a dedicated driver and vehicle to take us everywhere, and knowledgeable guides meeting us and showing us around the various places we visited. They were informative without overdoing it and engaged the teenagers without boring them to tears.

Next time I would try to pack in less, as we had a lot of long days and early starts; take less luggage, (we took far too much, not that we had to carry it anywhere), and build in a little more of the downtime that we get on our longer trips.

It was definitely a week to remember, and one that will remain with us forever. In the past, we have built our own trips and done our own research, but this time we used Trailfinders, which was brilliant and made the trip stress-free, with everything organised for us, from flights to internal transport to hotels and tours.

All in all, it was a welcome break from the average family package holiday and an eye-opener for us all.

Tags:
Previous Article
WHAT YOU NEED TO KNOW ABOUT ANTI-AGEING BEAUTY – AND OUR TOP 6 TO TRY
Next Article
MINEHEAD, WITHINGTON, SOUTH MANCHESTER

AND FREDDIE CAME TOO… DOWNSIZING WITH PETS
Dawn Harker July 17, 2020

AND FREDDIE CAME TOO… DOWNSIZING WITH PETS

CALL OF THE WILD – CARAVAN OR CAMPERVAN?