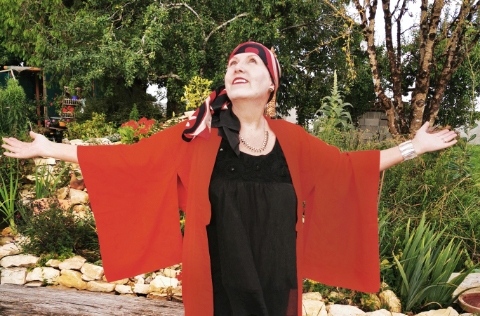 57-year-old Linda Eldon-Ramshaw was born into a foodie family with hard-working parents who made homemade delights to sell in their village store. She spent a great deal of time with her great-grandmother, who was an old-fashioned Northumberland fisherwoman, with vats of crab and lobster bubbling away in the yard. “I used to swap lobster sandwiches for Spam at school, ‘cause I was so bloomin’ fed up wi’ the stuff,” smiles Linda, with her charming Northumbrian lilt.

Known among friends for her generous hospitality, personal style and creativity; the preparing and sharing of delicious treats has been Linda’s lifelong passion, but a recent cancer diagnosis and ongoing chemotherapy has seen her turn her attention to dishes that both nourish the body and help to boost the immune system. In regular glimpses into her pantry, Linda will share her favourite recipes and hope to inspire you with her infectious joie de vivre and passion for flavoursome food.

Here, Linda introduces us to a dish that is not only delicious but is simple to prepare, flexible, and packed with valuable fibre and protein. It’s also fewer than 400 calories for a generous serving! 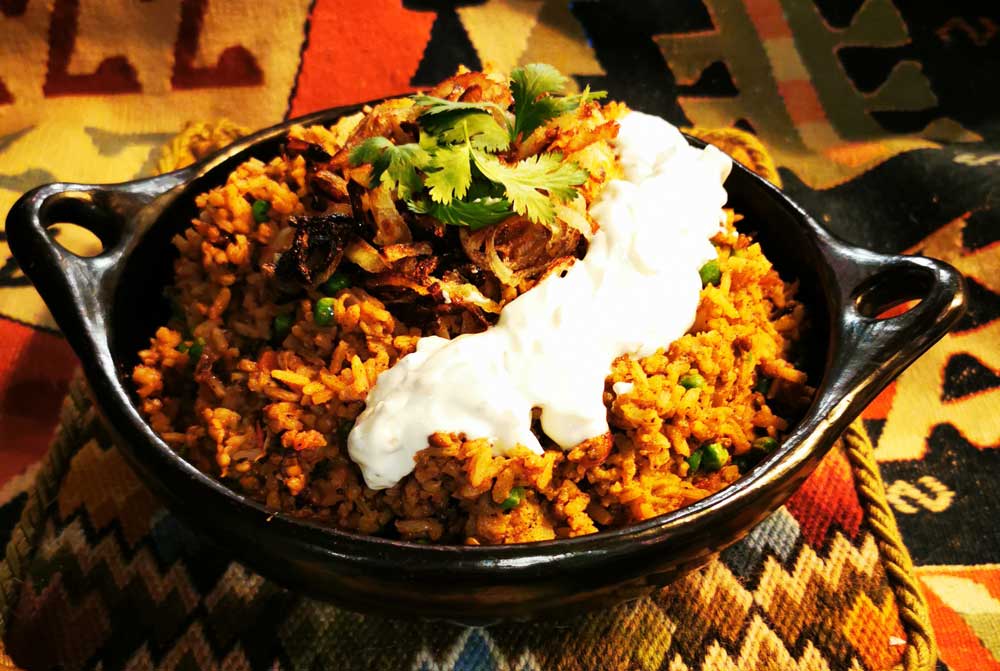 Mujaddara first appeared in Iraq, in 1226, in the Kitab al-Tabikh, (which simply means ‘book of dishes’), written by Muhammad bin Hasan al-Baghdadi. This tasty and soothing dish will fill up the emptiest of tummies without costing a king’s ransom. The lentils and rice are seasoned with cumin, coriander, cinnamon and allspice, transforming this plain staple into a wonderfully warm and aromatic treat. The yogurt dressing adds a fresh, cool element, which balances the seasoning and really cuts through the spiciness of the dish.

The original recipe, usually including meat, was served during lavish medieval banquets. However, without meat, this traditional dish was commonly prepared as an everyday meal by all members of society.

I believe that even in vegan form, the taste is so rich, warm and delicious that you will be more than happy to add this easy and inexpensive recipe to your list of family favourites.  It also has the added bonus that it is made in a slow cooker, so can be prepared in advance and greet you with enticing aromas when you arrive home after a busy day.

How to make Linda’s Pantry Mujaddara.

NB. The recipe will easily feed eight people if served on its own, or at least a dozen if used as a side dish. Portions can be frozen and reheated as needed.

Garnish with fresh mint, coriander or parsley and (if in season) sprinkle with fresh pomegranate seeds

“This dish is just as tasty served cold in a picnic or packed lunch, or served warm with grilled fish, slow-cooked pork, roast chicken or Moroccan style lamb tagine. However, it also provides a balanced meal for vegans or vegetarians served with the non-dairy yogurt dressing, fresh tomatoes and green salad. I hope you love it as much as I do!”

Tags:
Previous Article
FIT OVER 50 – HOW CHOOSING THE RIGHT LOCATION CAN IMPROVE YOUR HEALTH
Next Article
LINDA LUSARDI HAS A ZEST FOR LIFE!