LINDA LUSARDI HAS A ZEST FOR LIFE!

You would never believe that Linda Lusardi was 61 and had just recovered from coronavirus, which ended up with her being very ill in hospital for 10 days. She is full of joie de vivre, very happy to be having her new kitchen installed and looking forward to getting back to work. She talks to Lynda Clark about her fascinating career and her plans for the future

Linda Lusardi was a glamour model in the 70s but that is a lifetime ago. Since those days when she was everyone’s favourite ‘pin-up’ her career is now better known for decades on television with a list of credits including Emmerdale, The Bill, Dancing on Ice, Celebrity MasterChef and a raft of pantomimes, which Linda happily admits ‘she absolutely loves’.

In 1979 when glamour modelling was under the spotlight Linda seamlessly moved into acting. She started by touring in a stage play of Pygmalion where she played the leading role of Eliza Doolittle to great success. This led on to many incredible roles including playing Carrie Nichols on ITV’s Emmerdale, where she was part of one of the most publicised storylines, of who killed Tom King? Again, she played Maggie Lyons in The Bill in another hot storyline and played Frankie, in Brookside, opposite her husband Sam Kane on Channel 4 and on the spin-off DVD, Brookside Friday the 13th. 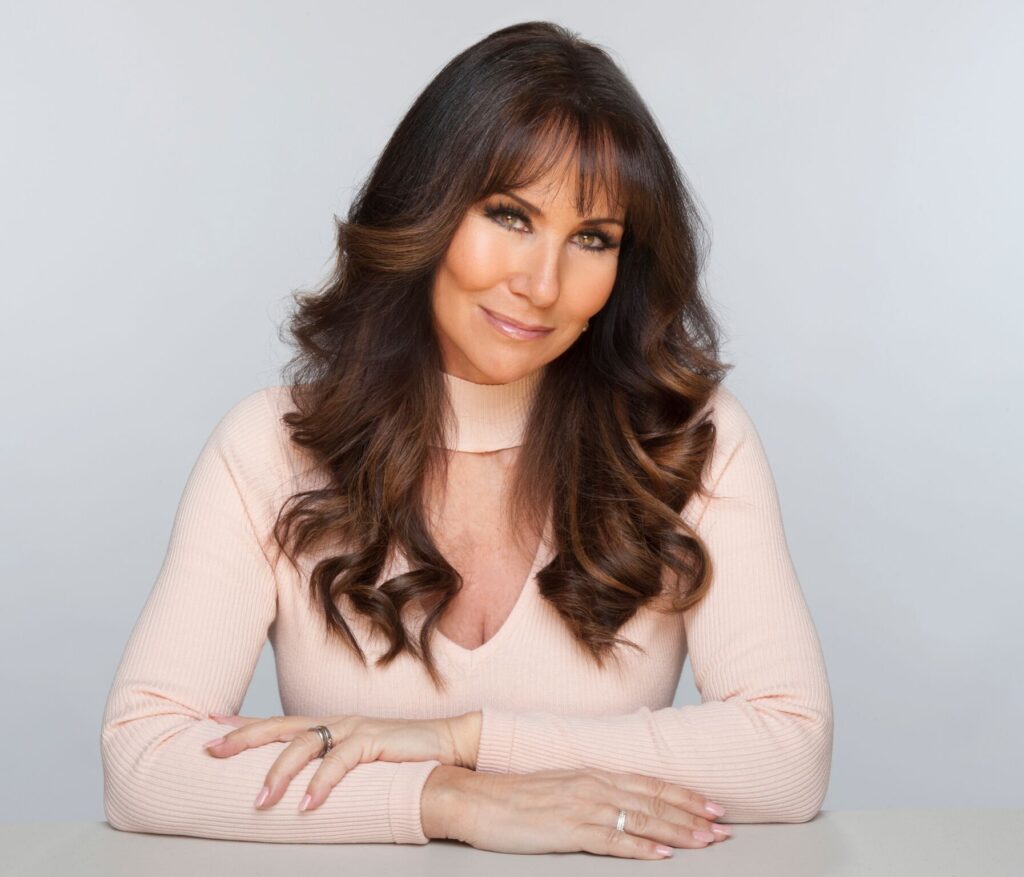 “There have been some real highlights in my career and probably playing myself in The Detectorists on BBC4 is one that I will never forget.”

“There have been some real highlights in my career and probably playing myself in The Detectorists on BBC4 is one that I will never forget. It is absolutely my most favourite programme and being asked to act alongside Mackenzie Crook and Toby Jones, who are such amazing and talented actors, was a dream come true. Dancing on Ice was another experience that was rather dramatic. I had no experience of ice skating and during training, I broke a bone in my foot and pulled all the ligaments too. It was obviously very painful but I was determined to carry on but had to have around six weeks off and then I had to catch-up before we filmed the show. My partner Daniel Whiston was so patient and amazing and I was then asked to join the national tour around the country with Torvill and Dean and it can’t get much better than that!

“I also went on to Celebrity MasterChef and that was so hard. I am quite a good cook but like everyone else, I never cook to a time limit. It was very stressful and to this day I have no idea how I got into the semi-final. I also a regular presenter on Wish You Were Here for BBC1 which I thoroughly enjoyed and I was also asked to appear at a Royal Variety performance. I always look forward to being on Loose Women, which is great fun and a super team to work with. I absolutely love playing in panto and my daughter, Lucy, who is also an actress, and I have worked together in a couple of pantomimes, which was such good fun! I have had a very interesting and varied career and I enjoy it all.”

But, there are other talents that Linda has tucked away – after starting her career in front of the camera she always had an interest in actually taking the photos herself. “I went on lots of trips in the past and was always helping the photographer out and learned a lot along the way. I was always a little scared of the darkroom but when digital photography took over I decided to take the plunge and started taking pictures myself.” She has a pretty impressive portfolio having taken photos of Danny Dyer, David Hasselhoff, Mel B, Martine McCutcheon and Vincent and Flavia from Strictly Come Dancing amongst others.

Linda has recently come out of hospital after getting Covid-19 and was very seriously ill but she has bounced back and ready to start work again. “It was very bad and I was so ill, but I am thankful I am now feeling so much better. It was a scary experience but I’m now enjoying life to the full again.”

A very keen DIYer, Linda never sits still! Her enthusiasm, generosity, love of life and passion for everything she does is quite infectious – she is a real super-star!