In the second instalment of ‘La Vie Au Logis’, Paul Tadman tells us about his, and his wife Kry’s, first exposure to French property hunting.

La Recherche a Commencé! (The Search had Begun)

We had our very first property viewing in France.

The agent’s details read: “A very pretty 19th Century mini-chateau, set on the edge of a village with restaurants, bars and train connections to Calais, set in its own grounds by a weir”.

We pored over the house particulars “just one more time” before I made the call to the local immobilier (estate agent). I mustered together as much of my schoolboy French as I could, and managed to arrange a date and time to view this turreted wonder; Le Petite Chateau, (or ‘LPC’, as we now affectionately referred to it).

We overdosed on Google Earth and, just a week later, our trip to view our ‘dream home’ felt as if we had been transported to the set of a French film we had seen a hundred times! So much so, that we knew all the local street names by heart and could almost smell the croissants baking in the oven as our future guests sipped freshly ground coffee, seated at gingham-covered tables, in our fabulous chateau orangery.

Well, I’ll admit we may have allowed our imaginations to run riot a little…

We had arranged to stay in a nearby hotel with a room that had the same wallpaper on the ceiling as it did on the walls. A confusing effect, usually created by a robust bottle of the local red, which we now know as sans codes-barres. (Without a barcode!) The fact that each section of wallpaper was peeling in exactly the same position to the next, suggested that a beleaguered decorator must have had just as much of a headache from hanging the paper in the first place! 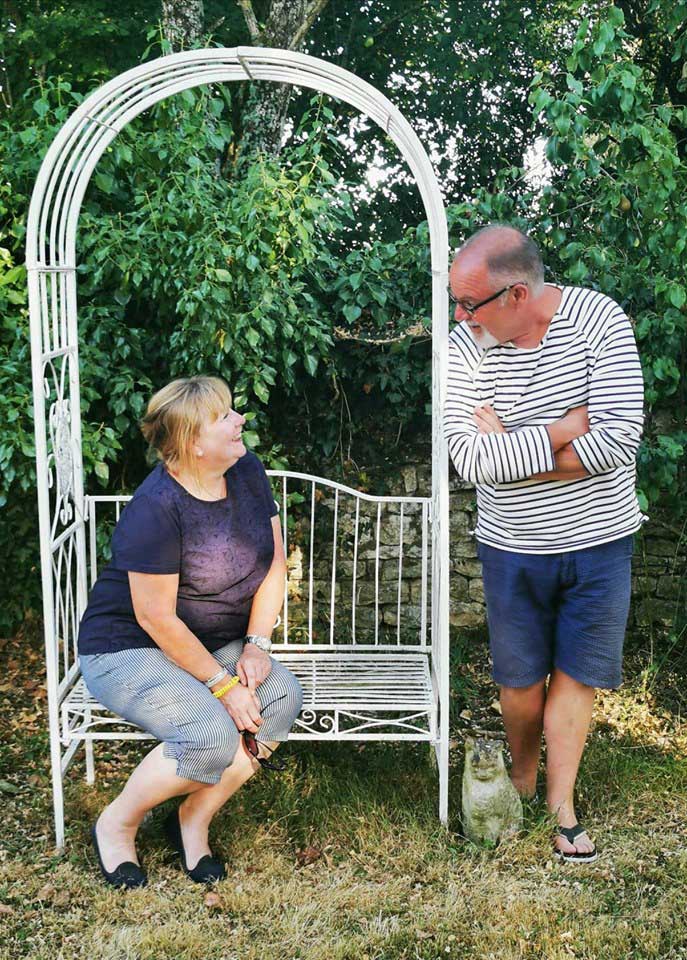 The next morning, our immoblier ‘JP’, who was a charming guy and dressed like something out of an Alain Delon movie, (beige raincoat, black roll neck.  sweater and sharply-creased slacks) unlocked the gates to the house we were about to view. The gates creaked in exactly the way we had imagined…

A beautiful reception hall with a flagstone floor greeted us, and lead to a large reception room, diner and kitchen. Of course, we were immediately seduced by its charm and décor.

We could see that a fair bit of renovation work would need to be carried out in the main house and the old carriage house opposite, which looked like it could be almost ready to house a couple of gites. Almost.

We had dinner that night at a beautifully quaint restaurant, on JP’s recommendation, just a couple of minutes’ walk from the hotel.  “Funny”, we thought, as we concluded that the hotel’s decorator must have been at work here too. A winter wonderland snow scene was suspended from the ceiling, complete with upside down reindeer. A bold concept for a warm Easter. Fortunately, the food and wine were exquisite, and the cheese board was out of this world!

We arranged a second viewing a week later. My best pal was a plumber and was happy to come with us to at least have a look. He was very kind in driving us through the Chunnel, and an hour and a half into the French countryside, remarking on how quick it was to get there.

Within minutes he confirmed what we already knew deep down.  As beautiful as the house was, it would turn very quickly into a money pit.

The owner trembled and looked furtive, as he explained that he couldn’t afford to replace the rest of the rotten window frames in the house after replacing over a hundred in the turrets. Bedrooms on the upper floors hadn’t been touched in years.

On closer inspection of the ‘gite’ building, we discovered that offcuts of pipe had been driven into the floor, and unwired electric sockets were balanced in holes in the plasterboard, to give the illusion of second fixing.

When we pointed this out to JP he took the owner to one side and had some very stern words with him in private. The owner was now shaking like a leaf and disappeared indoors. JP suggested we went for lunch, perhaps enjoy a bottle of fine wine and think long and hard about what taking on this property would really mean.

This was a real eye opener and a good lesson learned. Besides, we were barely an hour into France and there was so much more to discover.

We had only really just begun…