We found ourselves in one of the many lanes of vehicles waiting to board at the Portsmouth cross-channel ferry terminal. The lane next to us consisted of a dozen or so old vehicles that were effectively in fancy dress: one car looked like a dog, complete with faux tongue hanging out of the front grille, another was completely covered in astro turf, another sprayed shocking pink and yellow, a la Mr Blobby, and so on.

I was informed that the drivers were members of an “elite club”, and were making the run to France for charity. The guy who seemed to have organised the event was dressed like a1920s golfer, complete with plus-fours, two-tone brogues and a flat cap. The roof of his car (he assured me) was a replica of the 18th hole of the golf course at St Andrew’s, resplendent with flag and pole!

The rules of membership required that each car was legally roadworthy, and ‘dressed up’, on a budget of no more than £300. We watched as each in turn slowly mounted the ramp leading onto the ferry, like something out of the kids’ cartoon Wacky Races. As the last one trundled aboard, the tongue of the dog car flew off and ending up obscuring the windscreen of the Mr Blobby car behind, much to the annoyance of one of the ferry loading supervisors.

Safely aboard, we located our cabin and then headed for the restaurant, which provided a good meal and an enjoyable bottle of wine, as we perused printouts of the next raft of houses we would be viewing in Normandy. 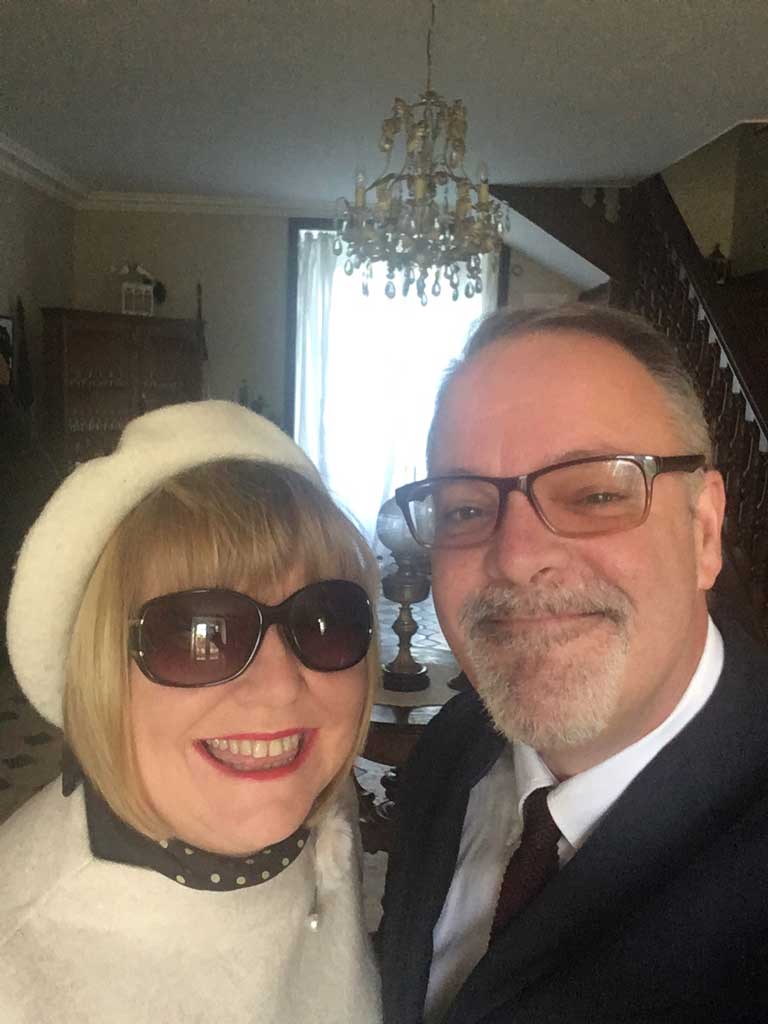 We docked in St. Malo just after dawn.

Barely off the ramp, we could see the dog car pulled over to one side with a front nearside wing hanging off. Mr Blobby’s bonnet was up, and our golfer friend was peering at the engine having parked at a jaunty angle in front.

Waving our cartoon friends adieu, we scurried off to check into our hotel for the first night. We had decided to make a long weekend of it and enjoy some of St Malo’s famous seafood in the historic walled town, before heading south for our viewings: six in total.

After a short drive, we arrived at the pre-arranged church car park meeting point, as the town clock struck eight am. The English estate agent introduced himself and suggested we leave our car in the car park and travel in his, as I had mentioned I was a little low on fuel. I thought this was most kind of him.

We got into his old Peugeot and he sped through country lanes, with a huge file of paperwork flapping about in the footwell.

“Before we see your chosen properties, I’d like to show you a few that have just come on to the market. They are very well priced!” he said. We thought this was a great suggestion, to optimise the time we had, and were delighted to be getting some inside information.

Two hours in, and having viewed several half-built houses that looked abandoned, it began to dawn on me that this was a big mistake. He was clearly trying to offload some of the rubbish at the lower end of his property portfolio on to some unsuspecting newbies. Namely, us!

Though curiosity had clearly got the better of us up to this point, I finally insisted that we viewed the properties that we had originally come to France to see.

We stopped “for a break”, at what we presumed was another potential house to buy, only to discover that the property was in fact owned by a musician friend of his, (with a disarming squint!), who insisted on showing me his drum kit, and proceeded to thrash seven bells out of it before throwing the sticks on the floor.

“You don’t want to live in this area mate!” he shouted. “There’s nothing doing here!”.

I was starting to think that he was right, especially as my ears were still ringing from him attacking the drums like a man possessed. Perhaps the lack of local excitement was because the entire village had been deafened, and driven to hiding indoors since his arrival?

By the end of that day, trying to work out which house was which, was proving very difficult.  Eight hours on, and feeling like we had been kidnapped, having had nothing to eat or drink, we were finally released back into the church car park. We couldn’t get into our car quickly enough. We had just enough fuel to get us back to the safety of the hotel in St. Malo, and I wasn’t planning to stop for anything!

Another lesson learned: always follow your estate agent to viewings.

The next day we had two more pre-arranged viewings. We arrived at another church car park, in another village, where we met our next ‘estate agent’. The first property she took us to look at was a traditional ‘longere’ (farmhouse) style house.

“This would make a nice gite!” she declared, pointing to a half fallen-down barn at the far end of the plot of land, from where a handful of cows stared curiously back at us over a rickety fence. By her own admission, our guide professed to prefer coffee mornings with her knitting group to showing people around houses.

She also seemed oblivious to the rats running around in the ceiling above our heads, as she showed us around the main house. It was another “no” from us.

The second house, she assured us, “already has two gites!”. One resembled a small cupboard with barely enough room to stand in, never mind sleep, and had a connecting door to another, which looked like it had been ransacked.

“This could be quite appealing!” chirruped the estate agent, hopefully…

“Just like the ferry back.” muttered Kry, under her breath.

By the end of the second day of fruitless viewings, we felt a bit deflated, like we had wasted our time, and hadn’t got any further with the search for our new home.

That night we sat at the same table, in the same restaurant that we had tried when we had arrived in St Malo. The fruit de mer had been freshly caught that morning. It was delicious.

The waiter remembered us and asked if we had any luck with our viewings.