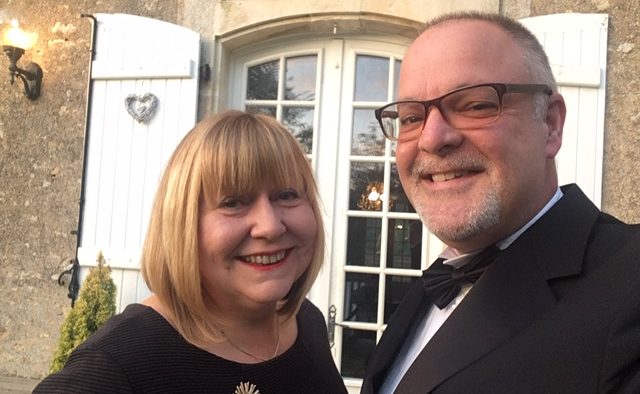 (We need to try further south!)

Our French property searches had come to a temporary halt. The market seemed to have stagnated, and there wasn’t anything that caused enough excitement to justify booking a ferry, despite a constant influx of emails from hopeful estate agents across the channel. Sadly, we discarded them all.

Work commitments and the pace of life in London had seemed to quicken week by week. Krysia and her business partner were planning to retire from their legal practice, and the office was a frenzy of sorting files and concluding cases. My music work was busy, with lots of live dates, and a wonderful opportunity to record a new record with Rhoda Dakar at Paul Weller’s studio in Surrey. Even my acting auditions had picked up of late.

Then, Krysia noticed an advertisement for city breaks in the back pages of The Observer Magazine. “Visit Poitiers” it read. In all fairness, we hadn’t thought of searching south of the River Loire.

“Well, if we are going to go swimming…” said Krysia, “We might as well get wet!” (No river pun intended…)

How right she was. With renewed enthusiasm, we began searching the internet again for possibilities, and off across the channel we went…

Just south of the Loire, past the town of Saumur, there is a village called Montreuil-Bellay, where, in the early 1980s I was lucky enough to stay on an exchange visit, in a family home above their restaurant business: the ‘Hostellerie St. Jean’. I knew the family had long since sold to new owners but felt compelled to visit for lunch en route to Poitiers.

It was an emotional visit, like walking through a photo album full of memories.

After lunch at the St Jean the owners very kindly showed us around the place, to see what I remembered. Since my last visit very little had changed. When asked what I wanted to drink, I said exactly the same as I had as a Francophile teenager.  “Orangina, s’il vous plait!” Well, I was driving, after all!

When we arrived in Poitiers that afternoon, we were excited to discover the city and its old town quarter. We had forgotten everything was closed on Sunday except for a take away pizza place. At least they served wine while we waited!

Back at the hotel Krysia pulled out a large map of the area from her file. She had drawn a semi-circle marking out the radius of where we were to property hunt over the days that lay ahead. The curve on the map became affectionately known as the “Poitiers Smile”, extending between the A10 and A20 motorway corridor.

The following morning, we met up with an English estate agent. He had originally tried to dissuade us from viewing the particular property we had requested, which we thought strange. We were still keen to see it though, as the photos were just beautiful.

Sadly, that’s all they were. Beautiful old photos and way out of date, but he had warned us about the owners’ refusal to update them. We stood in the middle of a huge courtyard, surveying an old manor house and farm in desperate need of attention.

“I’ll show you each room, have a think about what needs doing, and you tell me when you’ve run out of money!”

An unusual approach, but he was right. It didn’t take long. Behind the stunning façade were endless rooms that would need a complete renovation. The place was vast. Two pools, countless bedrooms, and a cluster of outbuildings, all set in fourteen overgrown acres. He told us that the owner was so desperate to sell, that even five figures would secure the deal. In reality, it would take a buyer with very deep pockets, an army of builders, and an eternity to return it to its former splendour.

Another valuable lesson learned: If you buy cheap, be prepared to pay three or four times the asking price for renovations, unless you are doing it yourself. And even then, you may not complete the task!

Krysia and I had lunch at a local creperie in the shadow of a church, built, according to the guidebook, in the “moyen-age” (Middle Ages). We sat gazing at the river as we considered our options.

If this was to be more than a pipedream we needed to get back on track. Krysia had previously spotted our fantasy property in a village called Limalonges. We kept getting drawn back to it, but suspected that it would take a lottery win to actually buy it. The particulars were still saved in the file with all the others. Well, it doesn’t hurt to dream…does it?

We followed our map south west, discovering the Deux Sevres and Charente departments, and with hope in our hearts for better viewings. The next day we met Tracy, our English ‘immobilier’, who took us to view two properties that were very well appointed. The first had three immaculate gites. The owner kindly offered us coffee and a homemade cake, which was cooling on the table to tempt our senses.

“Well, are you going to buy the place or not?” demanded the owner, suddenly.

We felt awkward and pressured and said that we would be in touch. We could sense that Tracy felt embarrassed. Although the gites were perfect, the house (as nice as it was) just didn’t feel right for us.

The second viewing was a combination of two houses and a pool, but again, no love at first sight. We felt the region was right for us, but we were not quite there yet, and nothing was remotely comparing to the house in Limalonges. Even though it had been reduced in price several times over the past year, it was still just out of reach.

We headed back to London to do some soul-searching.

My mobile phone rang. It was Krysia calling from her office. She had watched the asking price of our dream house in Limalonges fall twice in as many months, and having checked and doubled checked our figures, had concluded that it might just work out.

We telephoned Tracy, who, by chance had just taken the property onto her books. The owners clearly wanted to sell. At this stage our London house was on the market, so we considered buying a small house in order to see whether France really was for us. If it wasn’t, we could at least let it out, if we returned to the UK.

Back in France a week later, we met Tracy at the local supermarket and followed her to Limalonges. We had both researched the village so much, that it felt familiar as we wound through the narrow streets. We drove in through the entrance and walked across the gravel drive and there it was. The photos just didn’t do it justice. From the moment we walked in through the front doors it felt like home. There was a man cleaning a cabinet in the hallway who greeted us, “Bienvenue!” he smiled.

After being shown around we asked to have another look around on our own. We walked into the front room and felt like two excited children. “Are you sure we can do it?” I asked Krysia. “Yes!!!” she said. I’ll admit we both cried. We walked out into the sunshine, where Tracy and the friendly ‘Frenchman’ were chatting. “Au revoir, Monsieur” I said.

“I’m not French!” came the amused response, in a heavy Geordie accent.

As we still had a couple of other smaller houses to view, we soon found ourselves stooping in a dirty basement beneath some very suspect plumbing pipework. Tracy sensed that we were just going through the motions to be polite. She was right.

“Shall we put an offer in on Le Logis, then?” she smiled.

It really was ‘la coup du coeur’ – the one that grabs your heart.

Now all we had to do was make an offer and complete the sale of our home in London. That couldn’t be too much to ask now, could it?