COOKING UP A STORM WITH PRUE LEITH

Unless your TV has been turned off for the last few years, you’ll instantly recognise Prue Leith as one of the judges from Channel 4’s much-loved show, The Great British Bake Off. Here she talks to Lynda Clark about her home and her incredible career as a successful chef, cookery school founder, restaurateur, and writer

To anyone with a keen interest in cookery, Prue Leith is a legend. Just like millions of other people who tune in to watch her on the Bake Off each week, I knew Prue was one of the biggest names in the world of food, but when I did some research in preparation for our interview, I was astounded by Prue’s story – she really has had the most incredible life.

It might surprise you to know that Prue didn’t have much of an interest in cooking growing up… “I was born in South Africa, and my childhood there was very happy. We were a privileged family with a lovely lifestyle, and we had a great Zulu cook called Charlie, who ran the kitchen and cooked our meals. It never really occurred to me that I would become interested in cooking, and I really didn’t know yet what I wanted to do.

“We lived in a bit of a backwater, and when I was about 16 or 17, I was desperate to get away and dreamt of going to London, Paris and Rome, where I imagined life would be much more glamorous and fun. My mother was an actress, so I had an idea that I should go to drama school, but that didn’t work out. I went to an art school too, but was told by the director that I really wasn’t any good and to stop wasting my time. Luckily, my father was very tolerant and I managed to persuade my parents to let me go to Paris and attend the Sorbonne University.

“I started off by going to a language school so I could learn to speak French and be able to understand the university lectures, and after that I studied the Cours de Civilisation Française at the Sorbonne. I loved living in Paris; the food was amazing, and I suddenly realised I was actually very interested in cooking.

“To study at Le Corden Bleu in Paris would have been really expensive, so I moved to London where their course was much more affordable. To do the advanced course, you really needed to have had some cookery experience. Even though I’d worked in a restaurant, it was only to wash the dishes, but I somehow bluffed my way in, and they didn’t ask too many questions. We had friends in London, and I was lucky enough to be able to live with them while I settled in, which was a great help.

We worked in twos at Le Cordon Bleu, and my partner was a café and restaurant owner who wanted to hone her skills. I was great at anything savoury, but not so good at much else; this lady was really excellent – she was a great baker, and I wish I had taken more interest. I often stand next to Paul Hollywood on the Bake Off and I know I’m really not a very good baker like he is!” 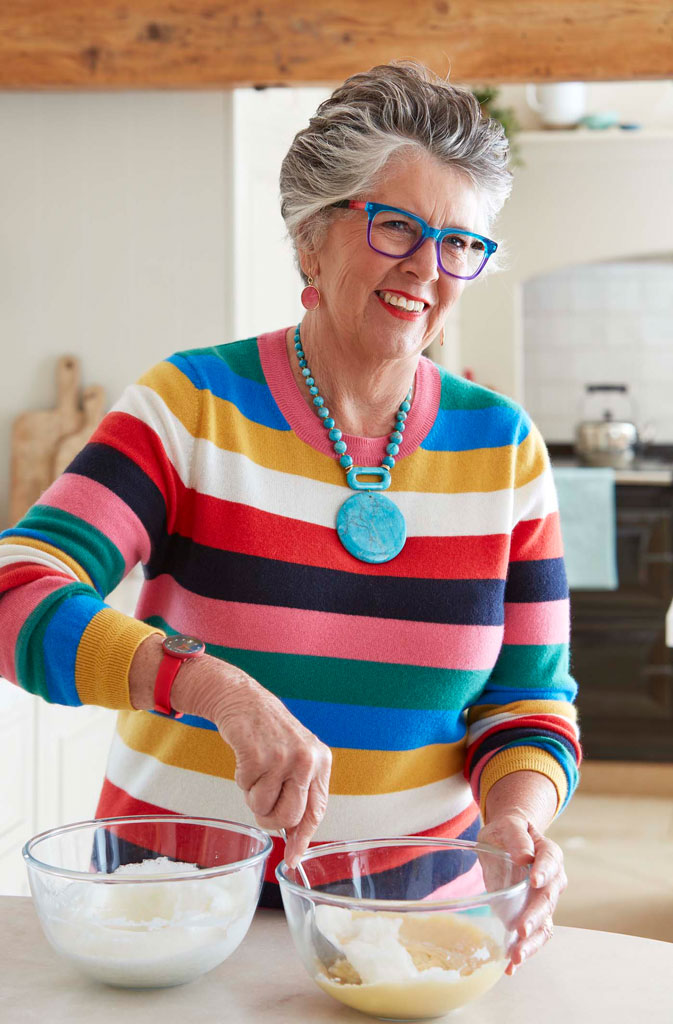 Prue eventually moved out her friends’ home, and into a bedsit in Earls Court. “Around then I started a little catering company cooking for dinner parties, which was quite stressful, but I like a little stress, and I really enjoy cooking in large quantities. I was doing a lot of the preparation and cooking in my flat, which I had to hide from the landlady, but luckily I was on the fourth floor so she never really came up there.

“I longed to have my own restaurant but had no money, so my mother helped me out, and I opened Leith’s, my Michelin-starred restaurant in Notting Hill, which I ran for over 25 years. In 1975, I also founded Leith’s School of Food and Wine, which trains professional chefs and amateur cooks, and on the schools 40th birthday we won The Best Cookery School in Europe, which was absolutely incredible. I was very proud, as most top hotels and restaurants had their own cookery school and the competition was fierce, so it was quite an accolade.

“In 1995, I helped found the Prue Leith College, which has since been renamed as the Prue Leith Culinary Institute, in South Africa. Up until then catering colleges were run with no government funding, and for some dishes, they had to use props like plastic lobsters as they just couldn’t afford the real thing. The London school was very successful, and we knew they would run this school under the same set of ideals that we did, so we decided to help them out. The school is based in Pretoria and is now the best college in South Africa. Whenever I visit, everyone is wearing their chef whites with great pride and it is wonderful to see what we have achieved.”

Apart from being passionate about food, Prue has written eight novels, which she is – quite rightly – very proud of. “I never understood that you should only be interested in just one thing. Of all the things I have done and achieved, I am most proud of my books, and I would like one word on my tombstone – Novelist. When you write a book, you are on your own and you are responsible for everything, from creating the characters to coming up with an interesting storyline. You have to keep on track and remember what you said in chapter one, for example, so timelines are very important. My books are stand-alone novels, but I’ve written a trilogy, too – some are loosely based on things that have happened to me, but they are not at all autobiographical.”

Adding yet another string to her bow, Prue has recently been working with Lakeland, the Lake District-based kitchenware retailer, to design a fabulous new cookware range influenced by her many global adventures. “Initially, I was thinking of doing a range of crockery, but when the lovely people from Lakeland came to visit me at home, they looked around my kitchen and were fascinated by some of the cookware I’d collected from around the world. Together we picked out some of my favourites, and we decided on a range of really interesting kit – tools that many people might not have already. Lakeland are absolutely lovely to work with and, like me, they insist everything must be perfect before production. The range is doing really well – the tortilla pan is a bestseller, and the dumpling press is going very well too. I’ve been a Lakeland customer for over 30 years, and I’m delighted that their customers are enjoying cooking with my products.”

Home to Prue is a stunning house in the Cotswolds, which she and her first husband bought in 1976, and where Prue has lived ever since. “When we bought the house, living in the Cotswolds wasn’t fashionable like it is now, but we renovated the property and loved it. My first husband was a writer who was seeking peace and quiet – his idea of hell was a neighbour knocking on the door to borrow a cup of sugar! – but the house is on the outskirts of a village, and you literally can’t see another house around it – it’s very private. “Sadly, my husband died in 2002, then five years ago I married again, which was marvellous. We have eight grandchildren between the two of us; John is a whizz at building things and has created all sorts of wonderful things for the children in the garden. It’s their idea of paradise, with a zip wire, tree walk and climbing wall – they love it!”

Prue knows how hard it is to get on the property ladder and said, “Other countries don’t have this obsession about owning your own home, but in England, we all aspire to buy a home… Back when I was running my little catering company from my bedsit, my husband-to-be was the chairman, but also a property developer. We found a couple of mews properties in Paddington which were tiny and had garages below them. In Victorian times, horses would have lived in stables where the garages were, and their grooms would have lived in the rooms above. The properties were very small, and unconverted, so I borrowed some money from my mother and bought them for £4,000. We renovated them and eventually sold them for £9,000.”

Prue has done so many things throughout her life (I haven’t even mentioned her jewellery range!), and it doesn’t look like she’ll be taking her foot off the gas any time soon – even as we wrap up our chat, she is getting ready to do some filming. She puts heart and soul into everything she does, and that’s what makes Prue Leith a legend! We can’t wait to see what she does next.

Tags:
Previous Article
LA VIE AU LOGIS: PART SIX
Next Article
GIVE YOUR HOUSEPLANTS SOME LOVE BY REPOTTING THEM THIS SPRING

GIVE YOUR HOUSEPLANTS SOME LOVE BY REPOTTING THEM THIS SPRING
Ryan Beal February 3, 2021