LOVE IN THE TIME OF COVID

Hayley Bystram had previously been living out her dream career as a wedding planner, but when she went through a divorce found that this was no longer an option. “A divorced wedding planner is probably a bit bitter,” she laughs. Not wanting to abandon her path completely, Bystram found matchmaking to be a natural fit 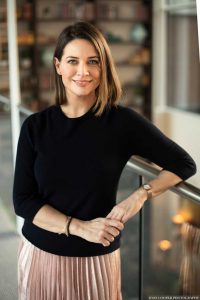 After thinking about making this career change, she saw an advert in a newspaper for a matchmaking agency in her local area. “As much as I run an agency where I make things happen and put people together, I’m a massive believer in fate,” says Bystram. Following on from working for this agency, Bystram took all of her experience in both the wedding and matchmaking industries and started her own matchmaking agency, the Bowes-Lyon Partnership, in 2009.

Bystram’s agency takes a tailored approach to hand-match people based on an intricate range of factors. She describes it as being more than you’d be able to see on a dating app profile – a modern method of finding love that she finds to be both overwhelming and inadequate for users. “We make sure that there’s so much compatibility in our members’ backgrounds that the only thing we leave to chance is chemistry,” she says. This is something that she believes you can’t find through a screen.

With the impact of Covid over the last year, you would think that business would have slowed down. However, Bystram’s agency had its highest success rates in terms of relationships last year. While not being face-to-face could produce an emotional disconnect, Bystram found the opposite as clients had to turn to more old-fashioned methods such as calls and even letters. In making an effort to communicate, a deeper rapport was built. “People had time to get to know one another, and so many relationships blossomed from this groundwork of friendship” she says.

As we leave lockdown, it can feel even more nerve-wracking to put yourself out there. “It can feel like this massive pool that you jump into with both feet and have to either sink or swim,” says Bystram. She believes that the best way to tackle this is by taking control of your situation. “Writing a list of what you’re looking for can really help,” she says. “What do you imagine your future to be and who would be someone that fits into that future? It’s about that fear and that lack of control, so the idea is to take control and understand more about yourself and what you want.”

While fate is a romantic concept, it can only take you so far. Knowing what you want and being proactive is the best way forward in finding love according to Bystram. “If you want something to happen don’t leave it to chance,” she says. “If it’s something that you desire in your future then take action and make it happen, it’ll come to you a lot quicker than if you’re waiting around.”

If you want to remove even more of the guesswork, joining a matchmaking agency could be the route for you. The Bowes-Lyon Partnership begins the process with a complimentary consultation to gauge more about yourself and what you’re looking for, with no obligation to join. If you think it’s the right fit, you can start a membership where you’ll be guided through the process of finding someone tailored to you.