The country straddles two tectonic plates, the Eurasian plate and the North American plate, and is one of the few places above sea-level where they can be observed. The plates are slowly separating, which causes the volcanic activity for which the island is famous.

Iceland covers 40,000 square miles yet has a population of just 360,000, of which two-thirds live in and around the capital, Reykjavik. No surprise, therefore, that Iceland consists largely of wide open spaces and empty roads. 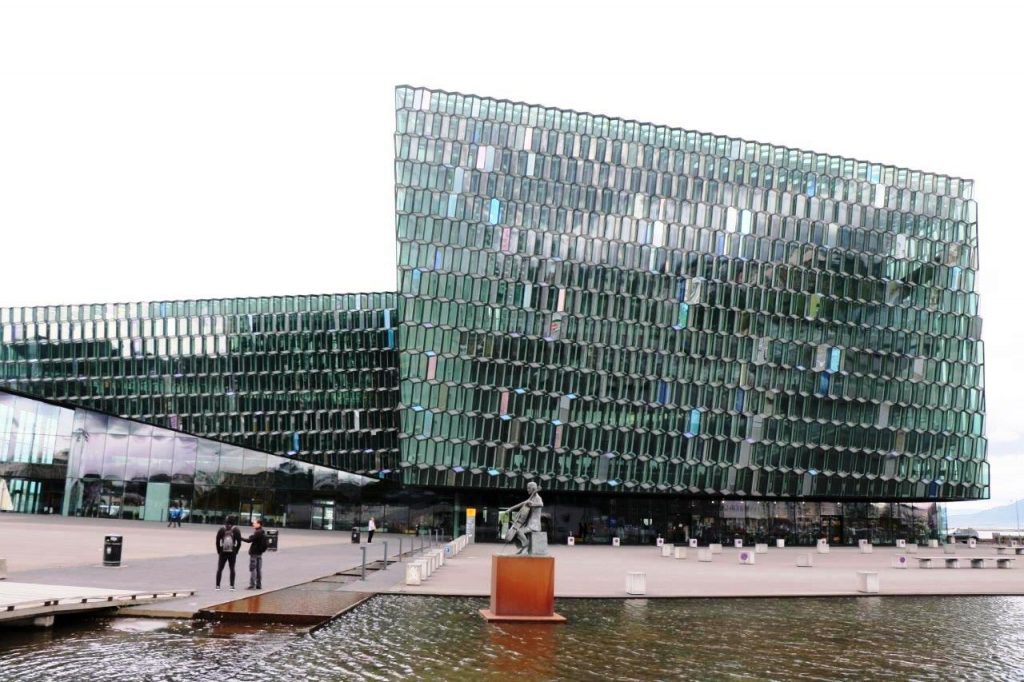 Visitor numbers have been growing rapidly and new hotels in the capital are being constructed in the area around Harpa, the striking glass concert hall overlooking the sea. Despite this, Reykjavik is easily explored on foot.

There are delightful places waiting to be discovered and some old buildings with unique and personal designs. Dominating the city is Hallgrimskirkja, a Lutheran parish church and the largest in the country. It is also one of Iceland’s tallest buildings. Designed by Guojon Samuelsson, the concrete edifice may not be to everyone’s taste, but the building clearly has a striking appearance. In front of the church is a statue of Leifur Eiríksson, the first European to set foot in the Americas, some five hundred years before Christopher Columbus. Nearby are numerous small cafes, and shops selling chunky Icelandic knitwear, ideal souvenirs if you have room in your luggage. 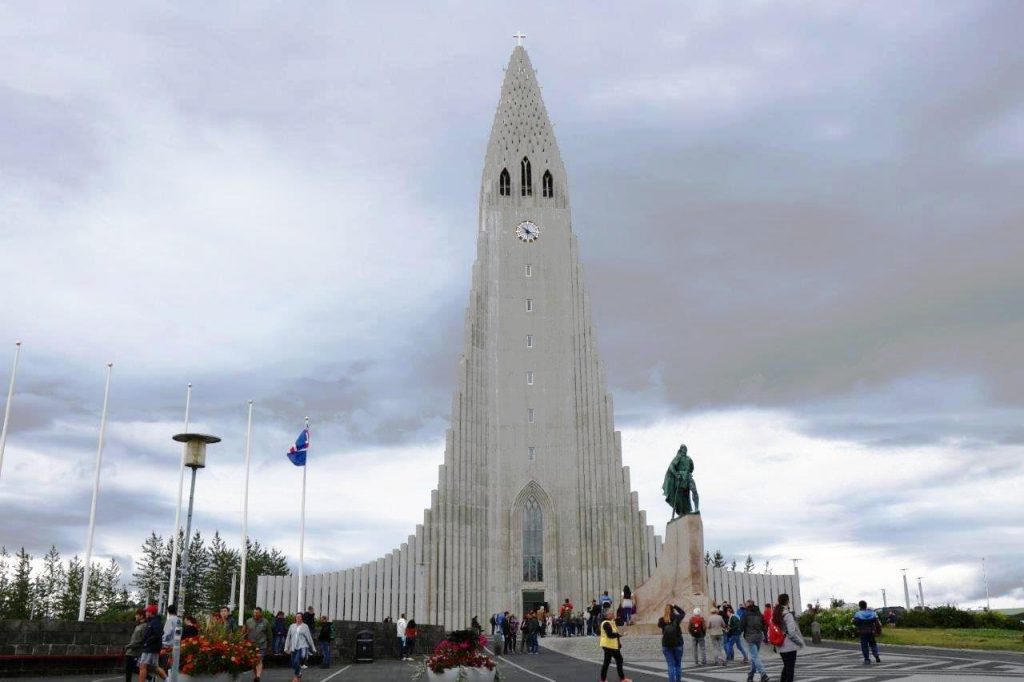 Once you leave the capital, exploring the rest of the country is relatively simple, and there is a well sign-posted tourist ring road that runs round the island.

Grundarfjordur, in Snaefellsnes, is situated on a peninsular on the western side of the island. It is home to a number of visitor attractions, amongst them the caves that inspired Jules Vernes novel ‘Journey to the centre of the earth’. The viewing platform at Djúpalonssandur Beach offered a fine view of the black volcanic sand.

As the weather brightened I arrived at Arnarstapi and enjoyed a picturesque coastal walk from the statue of the giant Bardur to the small harbour. Once an important trading post, in the summer sunshine it looked more like a Cornish fishing village. 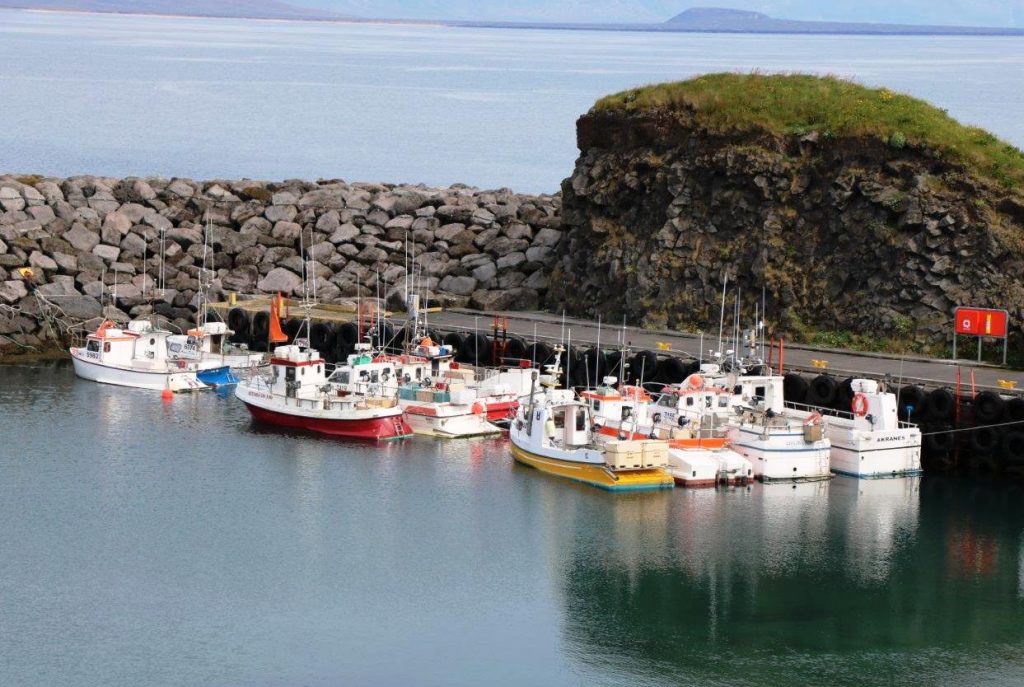 The area is also home to vast numbers of Arctic Terns. They have the world’s longest migration, spending the summer in the Arctic region then heading to the other end of the world to enjoy another summer in the Antarctic. It’s a round trip of some forty thousand miles. The birds build their nests on the ground but visitors need to be wary of getting too close. As I approached one it gave a warning sound then took off and flew close over my head. They regularly attack anyone who gets too close to their nests.

Heading further round the island I reached the northern port of Siglufjordur, a small fishing village with a population of around one thousand people, although in the herring boom around which the town was built, the population peaked at three times that number.

Many buildings in Iceland are heated using the island’s natural geo-thermal properties and it was from here that my journey took me inland to Namaskard where mud pools bubbled and steam escaped from the rocks around the area. A nearby lake was so hot that it was impossible to bathe in.

Another area created by volcanic activity is Dimmuborgir. The tall, black, strangely shaped volcanic rocks have led to the area becoming known as the ‘black castles’. Formed just over two thousand years ago, lava flowing down from a nearby volcano covered a lake and swamp area. The water boiled and the rising steam formed pillars of lava, many of them several feet thick. As the lava continued to flow downhill, the crust collapsed, leaving just the pillars of solidified lava. The whole area has an ‘out-of-this-world’ appearance and has been used by numerous movie-makers as well as NASA, who tested vehicles for exploring the surfaces of other planets.

My final stop was the eastern town of Seydisfjordur, surrounded by sea and mountains and with a population of under one thousand. The rainbow footpath leading to a pretty blue church are the central attractions. Close by is the preserved home of Asgeir Emilson a local folk artist, and other unusually decorated buildings. In the summer there is an active crafts scene, a nine-hole golf course, and for hikers there are plenty of mountainous challenges. 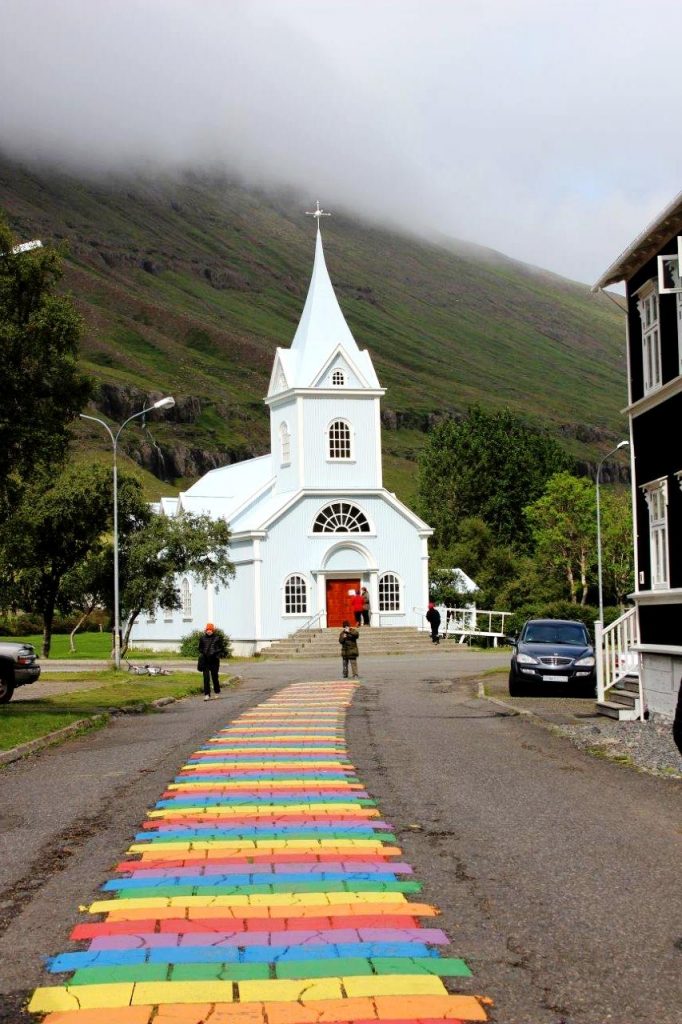 One thing, however, may confuse overseas visitors. Icelanders don’t use traditional family names or surnames. They use their first name plus the name of their father to which they add the word for son or daughter. For example, if a father called Jacob had a son Eric, he would be Eric Jacobson. If Eric had a sister Mary, then she would be Mary Jacobsdottir. Their father will not use the name Jacobson, unless he too was Jacob’s son, and similarly nor would their mother. So, a family of four could have four different last names. Confused? I was!

Until recently the government had an approved list of boys and girls names which parents could use, but in a nod to current trends, parents can now give approved girls’ names to boys and vice versa, and can also use the suffix ‘child’ instead of ‘son’ or ‘daughter’.

Confusing names aside, there are so many reasons to visit Iceland, It’s a unique place, full of surprises, with friendly people, amazing landscapes and empty roads.

British Airways flies from Heathrow to Reykjavik. Summer fares from £143 return, winter from £139. British Airways Holidays offers a range of accommodation. For example,  four nights at the 4* Ork Hotel from £399pp, travelling on selected dates between 1 August – 31 August 2021 inclusive. The fare includes economy (Euro Traveller) return flights from London Heathrow Airport, 23kg luggage allowance and accommodation with breakfast. Book by 7 July 2021. For the full range of accommodation, prices and availability, go to britishairways.com/iceland

Tags:
Previous Article
KEY WAYS WALLPAPER CAN MAKE A ROOM FEEL BIGGER
Next Article
EIGHT FAMOUS TV FILMING LOCATIONS IN THE UK TO VISIT ON YOUR STAYCATION THIS YEAR

EIGHT FAMOUS TV FILMING LOCATIONS IN THE UK TO VISIT ON YOUR STAYCATION THIS YEAR
Ryan Beal July 1, 2021