Aliza Reger is the daughter of the legendary lingerie designer Janet Reger. She has been involved with the lingerie business all her life and from the age of 10 was gift wrapping boxes for her mother’s clients, who included Joan Collins, Bianca Jagger and quite a few members of royalty. Aliza’s motivation is incredible and her drive and ambition are behind this extremely successful brand. She talks to Lynda Clark about her fascinating life

Aliza was born near London. Her parents already lived in Zurich where they lived in a large duplex apartment with marble stairs. One of Aliza’s first memories is falling down them when she was three and a half and she has fond recollections of the big garden with a playground and a sandpit. When she was about five they moved back to London and her parents bought a huge ramshackle apartment in Bayswater, which was nothing like as trendy as it is today. It needed a lot of work doing to it and had a leaking roof, so her parents decided it would be best for her to stay with her grandmother, in Reading, whilst the repairs were being done. She said, “My grandmother had a wonderful house with a large garden and there were fairies who lived at the bottom of it.”

“My mother was born in London but her family moved out of the East End during the blitz as it was frequently bombed. She met my father who was from Munich and they married, and a year they later had me. I have lived in many different countries, including Germany, Austria and France and also in Mauritius where we lived for 14 years. My mother moved the lingerie factory to Mauritius so she could oversee the production. One of my earliest memories was sitting on the cutting room table watching my mother work with silks and laces, which were to become her signature look. My mother was always very busy and it was just a part of life for everyone to be involved in her work so by the age of 13, I was going to trade shows during the holidays where my language skills were put to good use as I helped her to sell the Janet Reger brand.” 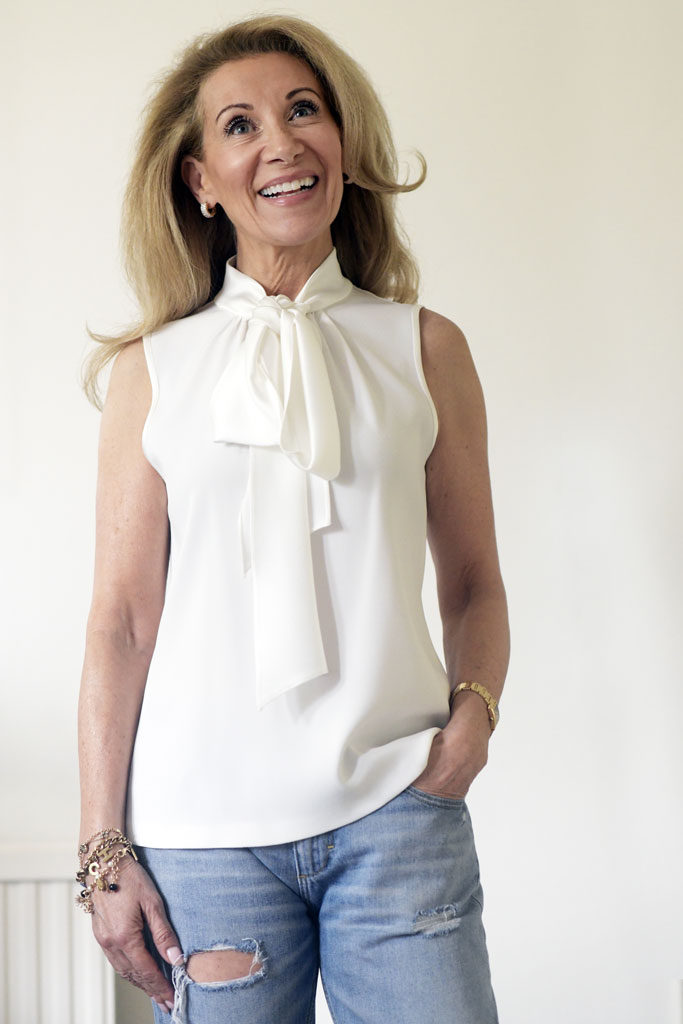 Aliza has been running the business since her mid-30s and works very closely with her team. She has an expert eye, a keen sense of colour, elegance and style. She became her mother’s deputy by her mid-20s. Janet redefined lingerie in the 70s and 80s but Aliza has taken the brand to a new level with a series of partnerships and licencing contracts both in the UK and globally.

Aliza said, “When my mother launched the business it was the Swinging Sixties and it was the beginning of Women’s Lib with a strong message to ‘burn the bra.’ My mother always believed in women having equal rights and a Voice and she said, “don’t burn your bra, but go out and earn enough money to buy your own.”

Since the pandemic Aliza has been very busy. Ann Summers, Next and Kaleidoscope were the first UK stockists of the new diffusion lingerie range – Janet Reger Rouge – which has been very successful. Aliza signed a global licensing deal with one of the largest lingerie manufacturers in Hong Kong and in January 2022 she is launching a new lingerie collection, which she says, “is very different – a complete new look.”

Janet Regar bedding available from Next at the end of July

It’s not just lingerie either – there is a fabulous new home fragrance collection also launching later this year with a wide distribution. If this wasn’t enough there is also a brand-new range of bedlinen available at the end of July which is available at Next.

“I have been working every day since lockdown with so many calls and online meetings, and I am really delighted with everything we have achieved to date. These new ranges are very exciting and I believe that my mother would be thrilled with what we are doing now and delighted to see we are still flying the flag for the great British brand she created. It is wonderful that the Janet Reger name still finds such resonance with what is now its third generation of customers, the granddaughters of those free spirits who did so much to shape their age.”

Apart from working extremely hard, Aliza is a fitness addict, an experienced skier and an accomplished cook and baker. Before the Covid restrictions, Aliza adored going to the theatre and travelling. As our interview was finishing I asked her how she manages to fit everything into a day? “I aim to stick to a strict work schedule, which obviously helps. I have got used to working from home and I have been wearing a lot of sportswear around the house but I have one rule – always wear lipstick! It makes you feel so much better about everything!”