Case Study On the Market Property

So many of us enjoy visiting historic houses set in beautifully landscaped settings – but how about living in a converted manor house surrounded by mature gardens? This is the reality for Beechcroft buyers, George and Rosemary Bickerton, at Orford Place on Ham Common – an outstanding retirement development set in fabulous, mature, three-acre gardens

Moving to a home at Beechcroft’s over 55s’ development on Ham Common in December 2019 was a major life change for George, now 87, and Rosemary, 74, who had been living for some years on the Isle of Arran. Their decision to move was prompted by a desire to be near family – two of their four children, along with five of their 10 grandchildren, live in Surrey. The Bickertons are now retired; Mr Bickerton was an engineer and Mrs Bickerton brought up the couple’s four children and worked in a variety of jobs.

“We had a beautiful garden in our former home and were thrilled when we discovered Orford Place with its amazing three-acre grounds,” says Mrs Bickerton. “During lockdown, we have been able to keep ourselves occupied by growing vegetables in the raised beds provided for residents’ use. We cultivate all kinds of vegetables including beans, peas, courgettes and rocket. We have been even more spoilt because we have the use of three Victorian greenhouses where we grow tomatoes, peppers and aubergines.

“We were amongst the first people to move in – and the first to start growing vegetables. Now, everyone has become interested to the extent that we’re going to need more raised beds. There’s a lot of collective gardening experience in this retirement community, as well as plenty of interest and enthusiasm.  Some of our neighbours even have degrees in horticulture.

“Everything seems to have come together quickly; we have a WhatsApp group and growing vegetables is one of our major topics. Of course, we’ve made plenty of friends since we’ve arrived – and particularly since we started growing vegetables. Gardening is a common interest.”

Besides gardening, Mr and Mrs Bickerton share a love of walking and the outdoors and Orford Place is perfect for this as Mrs Bickerton explains, “People were really surprised when we told them we were moving to London. They couldn’t believe why we’d leave the Isle of Arran– but Ham Common, with its ponds is a wonderful place. The grounds at Orford Place are equally beautiful with flowerbeds and an orchard – and this has been so important for our well-being. There are lovely walks on Ham Common; really it’s been a lifesaver. We would like to thank Beechcroft for developing this special site for us all to enjoy.” 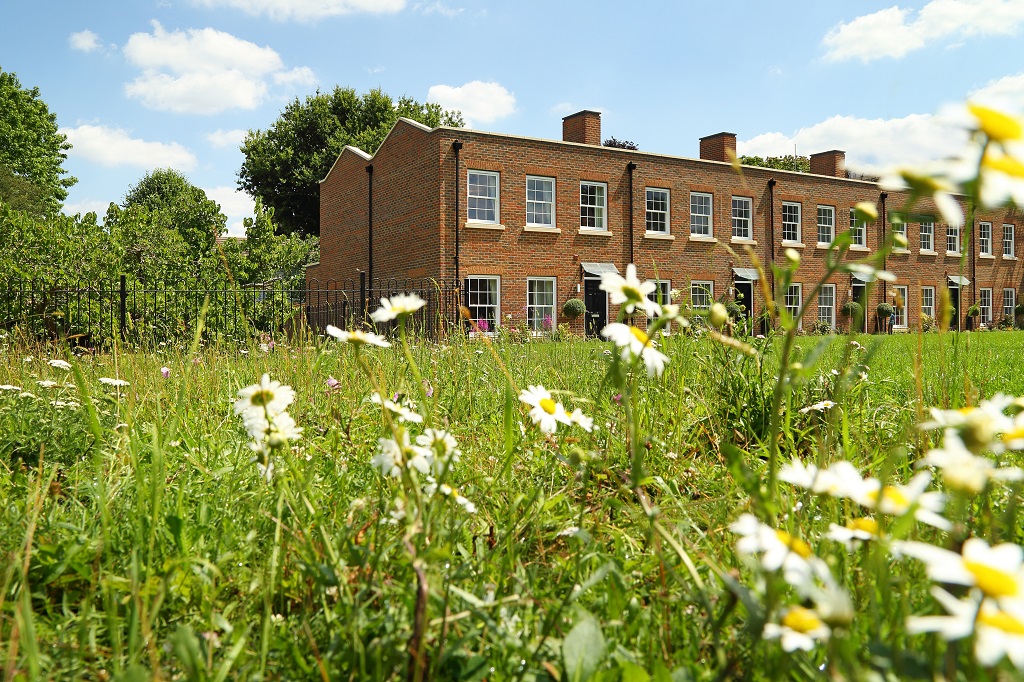 Built around 1730, Grade II listed Orford Place is one of the most impressive properties on Ham Common with many notable residents including a Vice Admiral and Lilian Maud Glen, wife of the 5th Duke of Wellington. Beechcroft’s careful restoration and conversion has transformed the original house and coach house into nine homes. A further 14 new houses and apartments complement the original buildings.

The gardens at Orford Place include formal gardens, a meadow and woodland areas with special features such as The Holm Oak, a magnificent native oak along with an ancient Black Mulberry and a Cedar of Lebanon, both approximately 300 years old. There’s a walled garden to the west of the house, an orchard with mature fruit trees and a vine house with a vine that’s almost as old as the original hall.  Outbuildings, once potting sheds, now contain a meeting room for residents, a cycle store and the Estate Manager’s office.

The final home now available at Orford Place is a spacious two bedroom house with a study, priced at £1,600,000. Visit Beechcroft’s website on beechcroft.co.uk for a video tour of the show home, further details on Orford Place and information on all Beechcroft developments. The sales office and show home at Orford Place are open for viewing from Tuesday to Saturday inclusive, from 10 am to 5 pm.  To contact the sales office, please call 0203 807 6508.