BOOK REVIEW: LAST NIGHT WHEN I WAS YOUNG BY GEOFFREY LITTLEFIELD

This book transports audiences into the sports world of the 1950s and ’60s, where they will re-live the unforgettable feats of some of the UK’s most celebrated athletes 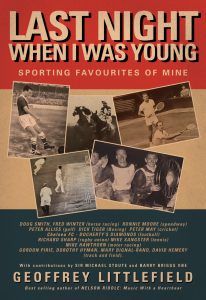 Bestselling author Geoffrey Littlefield masterfully intertwines history-making moments and mini biographies of some of the UKs greatest athletes of the 1950s and ’60s with stories from his own youth sports experiences. The result is an immersive read that gives audiences a front row seat for all the action, as told from the perspective of a self-described “walking, talking sports encyclopaedia and BBC sports quiz champion” who, as a school-aged boy, enjoyed nothing more than emulating his athletic idols.

Chapter by chapter, Littlefield pays homage to each athlete with a clever juxtaposition of history and fantasy, weaving a colourful tapestry that immortalizes their exceptional accomplishments.

Author Geoffrey Littlefield is a baby boomer born in London. His lifelong passions include sport, films, and music. His first magazine article 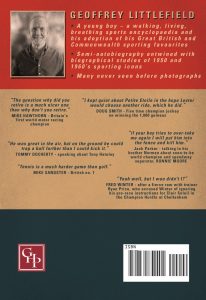 was published when he was just 13-years-old, featuring interviews with Chelsea FC and England soccer players. His first foray into the world of entertainment was when he appeared on the BBC radio programme, Junior Sporting Chance, where he captained the winning team.

His love of music grew simultaneously, with particular focus on the Great American Songbook. Littlefield eventually moved into professional music management and record production, and his written works include an exclusive interview with American singer, Vic Damone, who was described by Frank Sinatra as having “the best pipes in the business.” Littlefield has been the subject of several radio and television interviews about the Great American Songbook, both in the UK and America.

Published by Grosvenor House Publishing and available from Amazon, BN.com, getmybook.tv and many other outlets, £9.99

Previous Article
YOUR FESTIVE LOOK BOOK FOR THE MOST WONDERFUL TIME OF THE YEAR!
Next Article
SHOW YOUR SHOES SOME LOVE THIS WINTER (FOR THE PLANET AND YOUR POCKET)

SHOW YOUR SHOES SOME LOVE THIS WINTER (FOR THE PLANET AND YOUR POCKET)
Ryan Beal November 26, 2021